Insights: How to talk to clients about Bitcoin | Capital Group

How to talk to clients about Bitcoin

Fear of missing out is a powerful force in investing. And it’s difficult to ignore an asset that has gained more than 500,000% in just a few years, eliciting headline-grabbing commentary from Elon Musk and Warren Buffett, among others.

Bitcoin and other cryptocurrencies have captured the imagination of investors, putting financial professionals at the centre of an increasingly frenetic discussion about whether to jump into the fray or steer clear.

Sure, it may be tempting to dismiss Bitcoin as a passing fad and tell clients it’s inappropriate for their portfolios. But simply discounting it won’t be an adequate answer for some. Moreover, the question itself presents an important opportunity for you to better understand your clients’ risk tolerance.

“If you have a client who really wants to buy Bitcoin, just saying ‘don’t do it’ is a disservice,” says Barbara Burtin, an equity investment analyst at Capital Group who covers the banking industry. “In fact, owning a small amount can be a learning experience.”

Bitcoin is by far the most popular variation among a class of assets designed to create a digital currency through advanced cryptography. Other popular cryptocurrencies include Ethereum, Ripple and Litecoin. Unlike traditional currencies, Bitcoin operates without central authority or banks and is not backed by any government.

Bitcoin traces its roots to 2008, when an anonymous programmer operating under the pseudonym Satoshi Nakamoto published a white paper outlining the technology and code needed to enable the cryptocurrency.

Most important, the paper described the process of “mining,” which creates a supply of new bitcoins. Bitcoins are mined using computer algorithms that solve a series of calculations. These time-consuming computations verify bitcoins and allow for the creation of new ones. Only 21 million bitcoins can be mined, and they become more time consuming to create as the supply grows.

“Bitcoin tends to garner a lot of attention every time it has one of these steep run-ups in value,” explains Capital Group portfolio manager Alan Wilson. “But keep in mind, at some point it may go in the other direction, too. Anyone speculating should be prepared for extreme volatility in either direction.”

In fact, Bitcoin experienced a sharp decline on April 17, falling nearly 14% in an hour before rebounding. The temporary plunge appears to have been triggered by unconfirmed internet rumors that U.S. authorities were planning to crack down on money laundering involving cryptocurrencies. A few days earlier, Bitcoin and other cryptocurrencies rose as the trading platform Coinbase went public, attracting an $86 billion valuation.

Tweets from Tesla CEO Elon Musk have also famously contributed to Bitcoin's price volatility. For instance, his initial pledge in February to accept Bitcoin as payment for Tesla vehicles sent the cryptocurrency soaring. Then his reversal of that pledge in May triggered a slide. Meanwhile, the Securities and Exchange Commission issued a statement on May 11 calling attention to mutual funds with exposure to the Bitcoin futures market, noting that investors should “focus on the level of risk they are taking on” and whether they are comfortable with that risk. 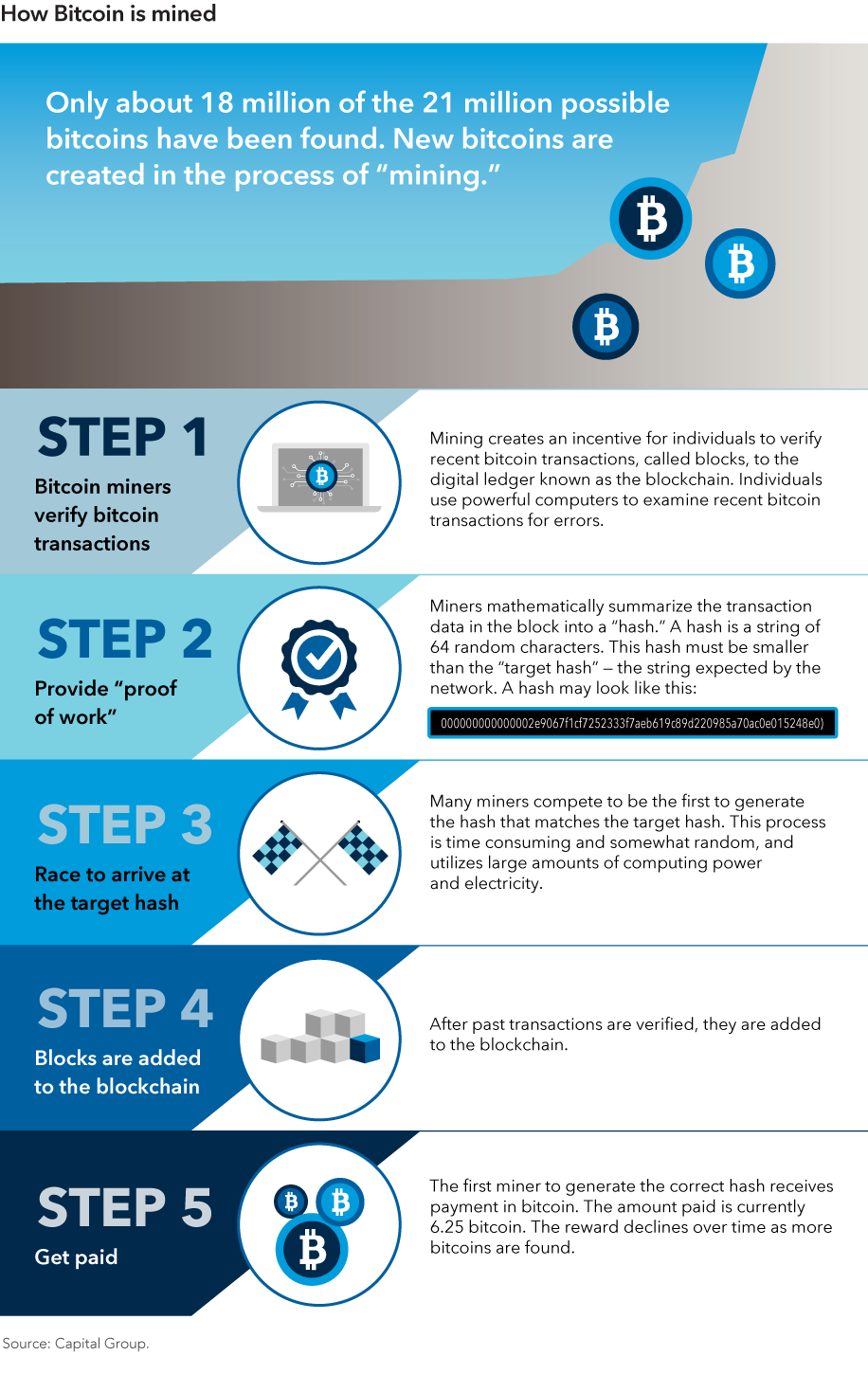 With Bitcoin basics out of the way, what are the key issues to consider when discussing cryptocurrencies with clients? Several Capital Group professionals who’ve studied cryptocurrencies offered these four ideas:

1. Suggest limits, and treat it as a learning experience

It’s easy for investors to extrapolate how $100,000 invested in Bitcoin five years ago would be worth over $14 million today. But it’s your responsibility to explain that such spectacular past results are not predictive of future performance.

Given Bitcoin’s extreme volatility, you might tell clients who are convinced they must own it to dedicate no more than 1% of their portfolio to any cryptocurrency, Burtin suggests. “If a client insists, ‘I must put money into this,’ advise them to invest no more than they can afford to lose,” she adds.

In addition, owning a small amount of cryptocurrency could be useful as an educational exercise, Burtin notes. Having “skin in the game” is a way to encourage clients to learn about cryptocurrency. It’s also a way to assess their true risk tolerance and observe reactions to high levels of market volatility.

Some clients might reconsider the idea of buying Bitcoin once they learn its limitations, says Douglas Upton, an equity investment analyst at Capital Group who covers metals and mining.

Risk 1: Bitcoin is impractical as a means of exchange from a resources standpoint. Bitcoin supply is limited, and new bitcoin can only be “mined” using high-powered computer systems that crunch algorithms. The process requires so much computing power that cryptocurrency mining consumes roughly 0.6% of the world’s electricity — more than that used by the entire nation of Argentina, according to the Bitcoin Electricity Consumption Index maintained by Cambridge University’s Centre for Alternative Finance. As the price soars, it becomes more profitable for speculators to install high-powered computers for mining operations. If it rises further, then so will electricity consumption, much of it in places where electricity is coal-based and therefore generates significant CO2 emissions, says Upton.

Risk 2: Governments are unlikely to allow bitcoin usage to flourish without controls, Upton says. “Bitcoin seeks to replace sovereign currencies,” he notes. “If allowed to proliferate, it could reduce the ability of governments and central banks to set monetary policy, and to tax earnings and wealth.” Accordingly, lawmakers around the world could decide to make the use of Bitcoin more difficult. South Korea recently introduced legislation to regulate cryptocurrencies to curb potential money laundering and other illegal activities. China, which has cracked down on cryptocurrencies in the past, just introduced its own digital currency, and the U.S. may someday follow suit with a “digital dollar.”

Risk 3: Bitcoin is not a store of stable value. Some investors may be drawn to cryptocurrencies thinking they’re an asset to store value, but there have been several cases of bitcoin theft. Some unfortunate owners have lost access to their funds by misplacing or forgetting their private digital keys. Since Bitcoin isn’t controlled by any central authority, there’s no one to contact for assistance.

Risk 4: Negative carry. Investors are normally paid to hold most major currencies, including the U.S. dollar, in the form of interest, Upton notes. That’s not the case with Bitcoin as investors who hold the asset may lose out on earned interest. The same is true of gold. This is called a negative carry, meaning investors can lose money simply holding the asset.

Risk 5: Bitcoin is not always a hedge against U.S. equity risk, says Capital Group currency analyst Jens Sondergaard. A common assertion of Bitcoin enthusiasts is that it may help provide downside protection when equity markets decline. While that has been the case at times, Bitcoin did not act as an effective hedge during the bear market in late February and March 2020. The price fell sharply, followed by a rebound and then a huge run-up. “It remains an open question whether Bitcoin can act as a hedge,” Sondergaard says. “Investors should be careful assuming too much about how it will behave in various market environments.” 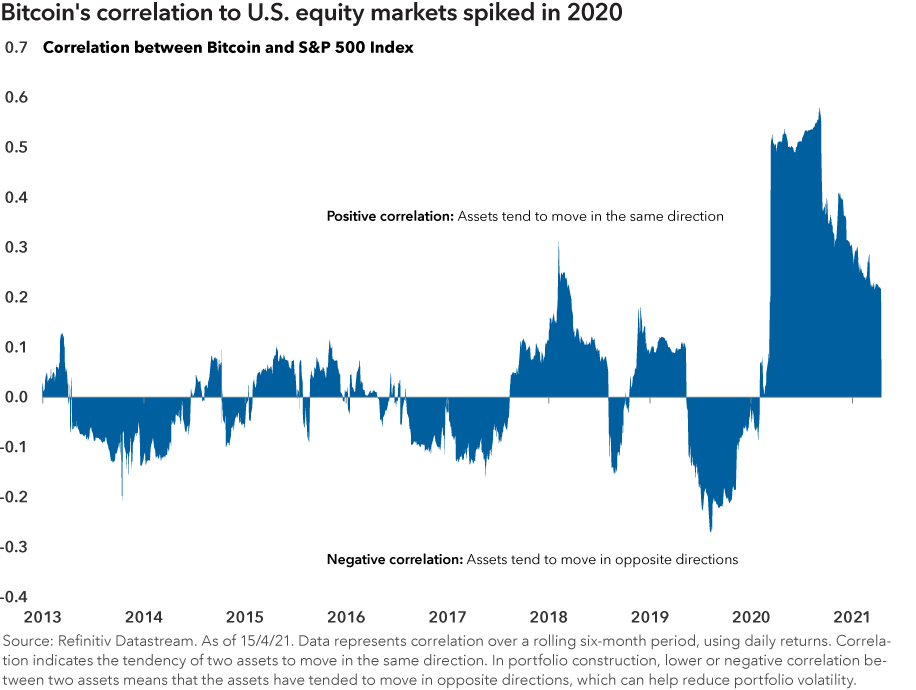 3. Acknowledge the potential of the underlying technology

While there are certainly big risks associated with Bitcoin and other cryptocurrencies, there are also groundbreaking innovations, says Ninou Sarwono, a Capital Group emerging technologies specialist.

Innovation 1: Blockchain. Think of Bitcoin as the first application of blockchain, the underlying technology that powers digital ledgers that can be shared over public or private networks and tracks transactions. These ledgers are created from transactions, approved by network participants and recorded as blocks of information. As more blocks of transactions pile up, they are securely chained to older transactions. These chains of data can be shared and added onto by trading partners, providing an easier and more efficient way to handle financial transactions.

Innovation 2: Initial coin offerings (ICOs). ICOs are a way for companies to raise money for their operations using cryptocurrency. The proceeds fund new projects while the buyers receive “tokens” that in many cases can be traded or used to buy goods and services from the issuing company. Tokens are akin to rewards points like frequent flier miles, Sarwono explains.

Such innovations could change the way companies raise money and widen the pool of companies available for investment. But again, the possibility has pitfalls. Government regulators have warned that ICOs are not registered and, therefore, are easy targets for fraud. Indeed, there have been quite a few problems associated with these vehicles.

Innovation 3: New alternatives for some parts of the world. The attractiveness of cryptocurrency tends to be greater in countries with less stable currencies, Burtin says. Like gold, cryptocurrencies may be seen as a way to store value. Additional regulation could be a good thing in preserving the benefits of cryptocurrencies while controlling the negatives.

Although it may seem prudent for advisors to discourage any attempt by clients to buy Bitcoin or other cryptocurrencies, there are valid reasons to explore the options. The best of which may just come down to investor psychology.

If a client buys Bitcoin, you can gauge their reaction to high levels of market volatility. This is a valuable, realistic way to understand true risk tolerance beyond what’s captured in a standard client survey, Burtin explains. That insight into a client’s psychology could be useful when crafting an asset allocation plan for their portfolio.

“Behaviour is so important when investing,” she says. “It’s more than Bitcoin. It’s a social experiment.” Barbara Burtin is an equity investment analyst and research director at Capital Group with research responsibility for European and Latin American banks and for bank outsourcing providers, globally. She has 12 years of investment experience, all with Capital Group. She holds an MBA with honors from the Wharton School of the University of Pennsylvania and a master’s degree in finance from HEC Paris. Barbara is based in Los Angeles. 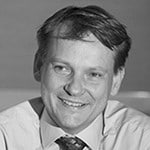 Douglas Upton is an equity investment analyst at Capital Group with research responsibility for global metals & mining companies. He has 32 years of investment experience and has been with Capital Group for 16 years. Earlier in his career at Capital, he also covered Canadian banks and was European director of research. He holds both an MBA and a bachelor’s degree in mathematics and physics from the University of Western Australia. Doug is based in London.