After three straight years of stellar performance, European renewable energy stocks have fallen back to earth in 2021. But the future is still bright for green power as the world’s transition to a low-carbon economy gathers pace.

In the short term, investor concerns about rising bond yields and inflation have dragged down the utilities sector. And a flood of cash into environmentally friendly investments in recent years has spurred fears of a green bubble. However, in my view, the fundamentals of Europe’s largest clean energy companies remain strong.

Clean energy is benefiting from three important secular tailwinds: falling renewable costs, new energy policies and economic stimulus. I call these factors the “Green Trifecta”. Moreover, the dominant companies, most of them based in Europe, have many advantages: a long runway of growth opportunities, strong development pipelines and development teams, significant scale benefits, robust balance sheets to fund investments and the benefit of vertical integration that many new entrants typically struggle to match. Although many investors continue to view these companies as bond proxies, there is potential for secular growth for many years.

The biggest reason I expect clean energy companies to do well is that renewable technology just keeps getting cheaper.

Renewables are already economically competitive as it is. And the cost of building a megawatt of clean power generation - whether that's onshore wind, offshore wind, or solar photovoltaic - is falling and should continue to do so.

Every year, the average cost of production probably falls by between 10% and 15%. The same is true for the costs of battery storage or green hydrogen. I have yet to see any meaningful slowdown in the rate of cost reduction. 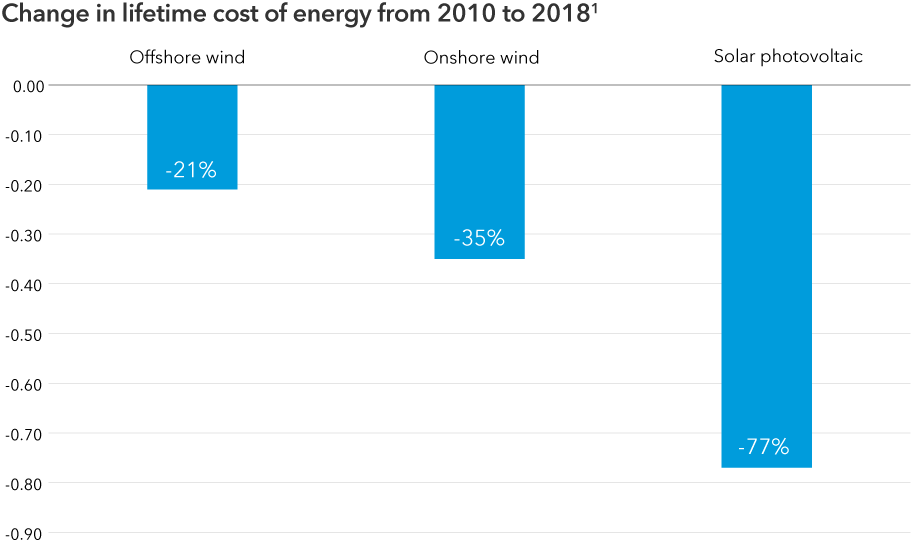 Denmark’s Orsted has established itself as a leader in this market by developing its own engineering, operation and maintenance skills. And there is scope to further industrialise the manufacturing process materially. Costs should continue to decline at pace.

So-called “learning effects” are playing a substantial role here. This is still an immature industry, and companies are consistently learning how to operate more efficiently.

Green hydrogen will be an important area to watch. It is seen by many experts as the key to decarbonising industries like steel and shipping. Hydrogen gas is still expensive to produce without using fossil fuels, but this appears to be the next big energy transition technology.

If I map the improvements that are coming on the cost of the technology used to create green hydrogen, plus where the cost of clean energy is headed, I can see a really significant reduction in costs. They could fall by as much as three quarters over the next five to 10 years, which is very similar to what happened in solar and onshore wind over the last decade or so.

There is a risk that big oil could muscle into the clean energy sector and threaten the dominance of today’s renewable majors, which include EDP, Enel, Engie, Iberdrola and Orsted. However, I believe the market is growing fast enough that there will be room for all. And while oil companies like BP and Shell have started to dip their toes into renewables as part of their net-zero plans, it will be hard to match the existing skills, scale and pipelines of the renewable majors.

Investing in green energy has been fraught with misperceptions based on traditional views of the energy and utilities sectors. Below are my thoughts on the most common of these views and how to consider green stocks through a more appropriate lens. 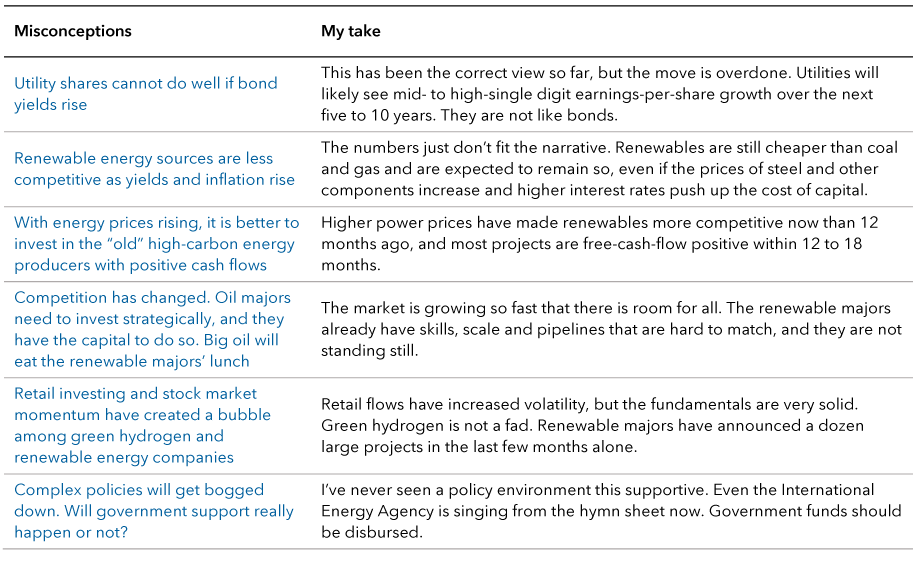 The second part of the Green Trifecta is the host of new policies being crafted by countries trying to curb their greenhouse gas emissions. Up to this point, little progress has been made on decarbonising the global economy since the UN’s Paris Agreement went into effect in 2015. However, in recent months it has started looking like the world is kicking into gear.

The US and China, which have long been climate laggards, have made major commitments to cut emissions and embrace clean energy. Of course, it remains to be seen how they back up those commitments, but the direction of travel is clear.

In August, the Intergovernmental Panel on Climate Change released a landmark paper warning that global warming will reach 1.5 degrees Celsius by 2040, even in a best case scenario where the world acts swiftly to cut greenhouse gas emissions. UN Secretary-General António Gutteres called this report a “code red for humanity.” The findings raise the stakes for November’s UN climate summit in Glasgow, known as COP26, where governments are expected to announce more ambitious plans to boost clean energy.

Even the International Energy Agency (IEA), an organisation that has historically significantly underestimated renewables growth, now appears to realise the scale of what is needed to avert a climate disaster. The IEA put out a report earlier this year that flags the need for investment in renewables to increase by three times by 2030.

The EU Green Deal will require a huge amount of investment ― as much as €7 trillion by 2050 ― which will come from a mix of private investment, public grants and subsidised lending.

Almost half of the investment is expected to go to renewables, electricity grids, battery storage and similar businesses, all of which are areas in which utilities are expected to invest heavily. For utility companies, this means growth. And that makes the sector more attractive than has historically been the case.

Governments around the world are also boosting clean energy as part of their plans to stimulate economies after the pandemic. In many countries, especially in Europe, much of the funding being made available for pandemic relief has strings attached that require it to be used in ways that will cut carbon.

The European Commission intends to provide expanded financing from the European Investment Bank (EIB) to increase support for renewables projects that are close to financial completion. The EIB has also pledged to stop providing money to fund fossil fuel projects, including natural gas.

I expect that European utilities that already have a large renewables footprint will continue to expand. Companies like Enel, Endesa, Iberdrola, EDP, Orsted and Engie have the biggest clean energy development teams, the ability to upsize their projects in construction, and the deepest pipelines of new development projects.

There is global potential beyond Europe, as well.

The IEA estimates that clean energy investments (in renewables, networks and other areas) could reach $5 trillion per year by 2030, vs. $2 trillion currently. The IEA and International Monetary Fund jointly calculate that this investment could add nearly 0.5 percentage points per year to annual global gross domestic product growth. The IEA also noted that this could create around 10 million net new jobs per decade ― plus additional jobs in construction.

In the US, President Joe Biden has embraced an energy plan that is ambitious and detailed. It falls far short of the so-called Green New Deal plan proposed by the Democratic Party’s progressive wing, but represents a sea change from the policies enacted by former President Donald Trump. In August, Biden signed an executive order aimed at boosting electric vehicle sales. He has also promised to back legislation that could spur significant government investment as he tries to fulfil his commitment to transition the US to net-zero emissions by 2050.

At the end of the day, even without government funding, I see very little that could derail the clean energy revolution. The sweet spot in renewables is centred around economics, driven by cost reductions that are set to continue. This industry doesn’t need subsidies, even at low energy prices.

The momentum to decarbonise the world economy is powerful and enduring enough to drive historic changes. That means it is time to stop thinking of utilities as staid, stodgy value investments that do not produce double-digit growth. These companies are not zero-growth bond proxies any longer, and in my view are poised to deliver strong investment results.

2. Source: International Energy Agency, Net zero by 2050 (May 2021). Totals may not reconcile due to rounding.

3. Source: International Energy Agency, Net zero by 2050 (May 2021). Totals may not reconcile due to rounding. Bobby is an equity investment analyst at Capital Group with research responsibility for European utility and medical technology companies. He holds a bachelor's degree in finance and accounting from the University of Edinburgh. Bobby is based in London.