It’s tough to ignore one simple fact: U.S. stocks have outpaced other developed market equities over the past 102 months by a wide margin, on a rolling three-year basis. This period of relative underperformance offers value-oriented investors a place to bargain-hunt at a time when U.S. equities and many other asset classes are expensive by nearly all measures.

Global equities (ex-U.S.) remain attractive due to several factors, including the so-called “valuation gap” between U.S. companies and their counterparts in Europe and Japan. On average, the price-to-earnings ratio of developed-market, non-U.S. stocks is 14.3, compared to 16.6 for U.S. stocks, as of May 31, 2018. That’s a big difference and it could mean that these markets have more room to run while U.S. stocks may struggle in the face of such lofty valuations.

“The key question is, can global equities do well without the U.S. leading the way?” asks Lisa Thompson, a Capital Group portfolio manager. “I believe they can, on a relative basis, given the more attractive valuations we are seeing in many non-U.S. markets.” 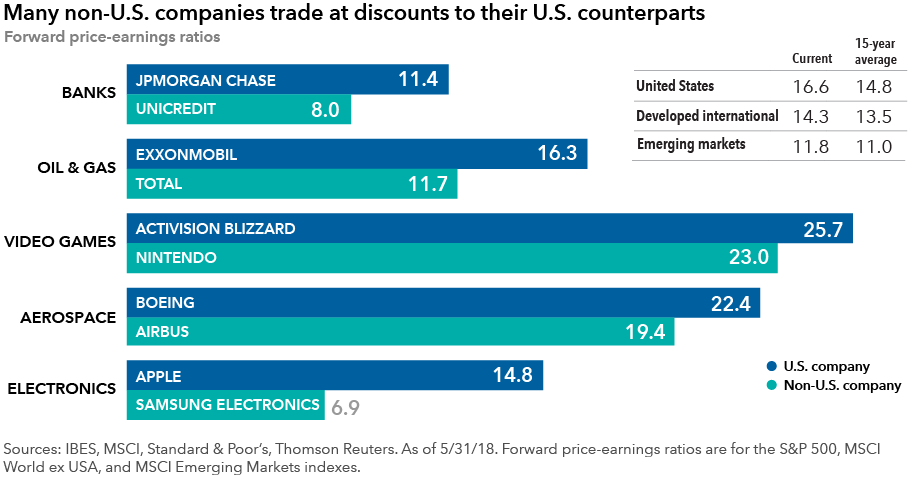 Banking on the eurozone

The valuation story is particularly compelling in the European banking sector. Many eurozone banks have struggled in recent years with strict regulations, sluggish economic growth and ultra-low interest rates that have severely crimped the profitability of the lending business. But as the European economy recovers from the recessionary and debt-crisis years of 2011-2012, many commercial and investment banks are poised to enjoy the fruits of improved business activity.

Higher interest rates may also be on the horizon. The European Central Bank announced on June 14 that it will begin winding down its massive bond-buying stimulus program, which effectively suppressed eurozone interest rates in an attempt to jump-start the economy. Interest rate hikes likely will follow in mid- to late 2019, a bit longer timeline than previously expected but still well within sight.

“The rates story is going to take a little bit longer in Europe,” Thompson notes. “But the return of volatility to global financial markets should benefit the investment banks, since they can profit from increased trading.”

Other sectors where Europe arguably has an edge over the U.S. include luxury goods, chemicals and industrials. For example, the valuation gap between the world’s two dominant airplane manufacturers, Boeing and Airbus is 22.4 versus 19.4 on a forward-looking basis, as of May 31, 2018.

“The Boeing-Airbus comparison is an interesting one because it’s a global duopoly and they are at slightly different phases in their cycles,” explains Capital Group portfolio manager Jody Jonsson. “Boeing has come into a cash-generation phase of its cycle, producing much higher dividends and share buybacks. Airbus is not too far behind in that respect, and it may have more upside potential because of its lower valuation.”

Expanding the view to emerging markets, the valuation differences often are even greater. The world’s two largest smartphone makers, Apple and Samsung, for instance, have vastly different valuations (14.8 verses 6.9, respectively). There are significant differences in their business lines, of course, but the valuation gap is so large that it can’t be ignored, Jonsson said.

“Apple itself is reasonably valued, in my opinion, at a low double-digit P/E,” Jonsson notes, “but Samsung is even lower, trading at just seven times earnings. I do look at comparisons like that around the world, and I think they provide some very interesting opportunities.”

For a time last year, it looked like economic growth trends in Europe and Japan had taken a dramatic turn for the better. Those trends, coupled with market-friendly election results in France and Germany, fuelled an equity and currency market rally that has since faded. But the fact remains that Europe and Japan have both emerged from long-term economic doldrums and are now on somewhat stronger footing.

In the first quarter of 2018, the 19-member eurozone grew at an annualized rate of 2.5%, down from 2.8% in the previous quarter. But that’s still roughly on par with the 2.8% growth rate of the U.S. economy. Japan, meanwhile, enjoyed a two-year growth streak until the first quarter when its economy contracted by 0.6%. The recent slowdown in Europe and Japan could lead to additional stimulus measures down the road.

“After a very strong 2017, eurozone economic data has softened quite a bit,” says Capital Group European economist Robert Lind. “We are now in a situation where European growth is probably going to normalize somewhere around 1.5% to 2% or so, which is close to its sustainable long-term rate.”

Meanwhile, the equity risk premium in both Europe and Japan remains attractive, Lind notes. That’s a key metric since it compares the relative attractiveness of investing in global equities with a supposedly “risk-free” alternative represented by a mix of government bonds. With European and Japanese bond yields hovering around historically low levels, the equity markets may continue to offer a significantly better option for investors seeking a greater opportunity for capital appreciation. 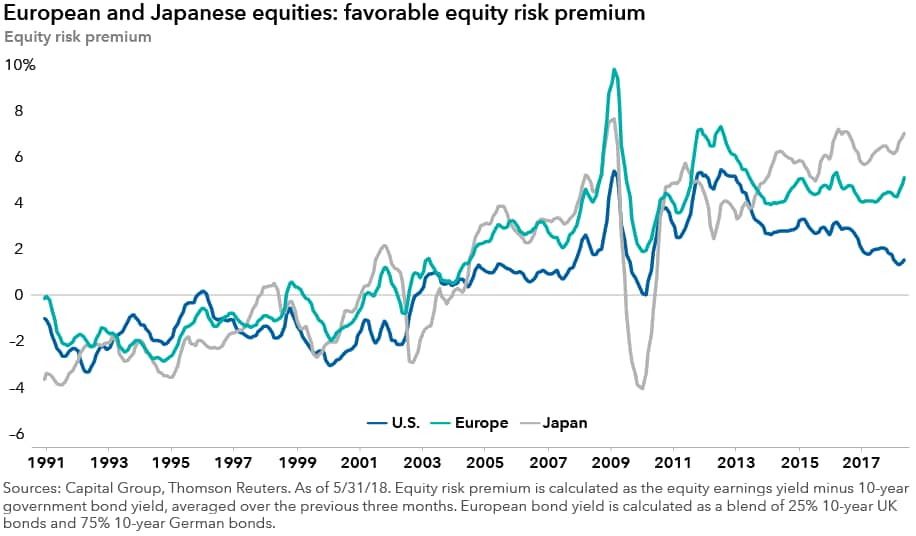 Until recently, the political scene in Europe and Japan also seemed to be reaching a level of stabilization. German Chancellor Angela Merkel and Japanese Prime Minister Shinzo Abe both won re-election and, in France, business-friendly reform candidate Emmanuel Macron rose to the presidency. Macron’s rise to power helped fuel last year’s European stock market rally, but it was relatively short-lived. This year, political turmoil in Italy and Spain is threatening the stability of the European Union once again.

The euro tumbled against the dollar in May after Italian President Sergio Mattarella blocked the formation of a coalition government that included leaders from two parties with euro-skeptic views. The impasse raised investor fears that Italy may consider leaving the EU and the eurozone. Italian stocks declined 9% in local currency terms. By the end of the month, party leaders reached a compromise and started the process of forming a new government, but their support for the EU remains tepid at best.

Meanwhile, in Spain, investor concerns about a political fundraising scandal sent Spanish stocks spiraling downward and culminated in a no-confidence vote against Spanish Prime Minister Mariano Rajoy. He stepped down on June 1, setting the stage for Socialist leader Pedro Sánchez to succeed him. Spanish stocks ended the month with a 6% loss.

“The new populist government in Italy has raised fears of another Greek-style fiscal crisis,” Lind explains. “I think such a crisis is unlikely because of domestic and external constraints on the new government’s policies and a currently benign fiscal position, but this renewed political turmoil clearly isn’t helping the investment climate in Europe.”

This can’t go on forever, right?

The relative underperformance of European and Japanese equities compared to U.S. equities — from an investor-psychology perspective — may leave investors feeling like it’s always been that way. In reality, the story is quite cyclical. Throughout recent history, there have been significant amounts of time when U.S. stocks were the laggards, such as the period after the tech bubble burst, or during much of the 1980s when Japan’s “economic miracle” sent Japanese stocks soaring to record highs and Japanese companies went on a global real estate buying spree.

How long the current cycle will continue is anyone’s guess. But given the length of this period, as well as the glaring valuation gap there is scope for other global developed markets to outpace the US going forward. Lisa is an equity portfolio manager with 32 years of investment experience. She holds a bachelor’s degree in mathematics from the University of Pennsylvania and is a CFA charterholder.