The International Monetary Fund’s (IMF) latest World Economic Outlook (WEO) shows the difference between the 2024 GDP levels between the pre-COVID forecast and the current one. In other words, it shows how much output was lost during the COVID crisis and highlights the significant deviation between regions in the world. For example, the US 2024 GDP level is forecast to be higher after COVID than before. But more importantly, it shows the divergence in growth between the developed markets and EM countries. Besides the EM Europe category, most other EM countries have seen considerable output loss during COVID. In general, the EM economies have lost around 12-14 months of growth through the pandemic, while developed economies have only lost 6-8 months of growth.

The OECD conducted a similar study for per capita GDP, showing the US and Korea reaching pre-pandemic per capita income levels around 18 months after the coronavirus spread. Europe is generally expected to take 2-3 years to reach this level, while many EM countries, including Mexico and South Africa, are expected to take 3-5 years.

A number of factors are driving this differential in growth:

Domestic monetary and fiscal support: Differences in the strength of economic recoveries are being driven by governments’ capacity to support workers and businesses that have been more vulnerable to the pandemic. Developed economies, on the whole, have been able to provide strong fiscal support both to households and companies and central banks have supported their economies through asset purchase programmes and other forms of monetary easing. Some EM countries have been able to offer fiscal and monetary support (such as China), but generally the support levels have been lower than in developed countries.

Vaccine rollout and containment measures: Countries that have rapidly rolled out vaccine programmes and those that are managing the spread of the pandemic through effective public health strategies are generally seeing a faster economic recovery. Many EM countries are facing slow deployment in vaccine programmes and renewed outbreaks. The IMF highlights the difficulty in vaccine procurement in EM countries and the fact that lockdown and containment measures will be needed more frequently this year and next, increasing the likelihood of “medium-term scarring effects on the potential output of these countries”. This compares to the post-global financial crisis period, during which EM countries recovered relatively rapidly while DM countries lagged behind with greater scarring. While we agree with the IMF about these factors, we think that less stringent mobility restrictions in EM countries may also help to lessen EM recessions, especially if vaccines can be rolled out soon. In Asia, early and stringent clampdowns stemmed the virus. China, in particular, has experienced a relatively rapid recovery in economic activity, and it should benefit from fundamental and technical tailwinds. Given China’s intra-regional trade, and as a major consumer of commodities, its speedy recovery has a positive feedback loop on the emerging markets.

Dominant industry: Another important factor is how dependent countries are on sectors that have been negatively affected by the pandemic. Tourism-based economies are generally struggling given the slow normalisation of cross-border travel. Global oil demand is showing signs of recovery after a record drop in the first half of 2020, but it may take some time to return to 2019 levels. While we expect prices of commodities such as iron ore and copper to rise, we don’t believe that this commodities cycle will be as strong as the one following the 2008 financial crisis. That cycle was fuelled by a huge construction boom in China that is unlikely to be repeated on such a large scale this time around. Consumers have generally been spending more on goods and less on services since the onset of the pandemic. Countries involved in supply chains in pharmaceuticals, medical supplies and IT materials have benefitted. Despite political rhetoric, we doubt that a large-scale relocation of supply chains out of developing economies will occur, and recent data on manufacturing supports this view.

Beneficiary of global fiscal stimulus: EMs now look set to ride on the tailwinds of stimulus from China, the US, and the rest of the developed markets through rising exports. As the chart below shows, the impact of US fiscal stimulus is likely to be an important boost to EM growth, but it will not benefit all EMs equally. Mexico, Brazil and China look set to benefit the most from a surge in US import demand. The large, less-open economies of EM Asia (Indonesia, for example) will not see their GDP benefit as much generally from stronger trade volumes. Their rebound depends on making progress on vaccinations and/or herd immunity, which is still slow going. 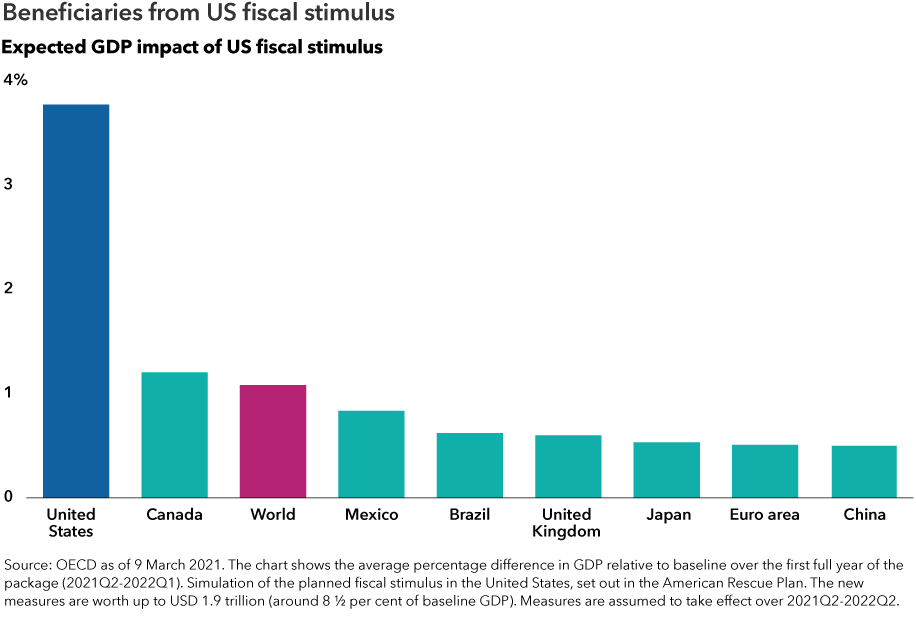 The risk for EMs is that the global growth rebound is so strong that monetary policy is tightened before the ‘ripple through’ to EM economies has had a chance to take hold. Countercyclical fiscal policy may also kick-in late this year for many in EM Asia and probably intensify as the COVID shock dissipates. While this may reduce the tailwind from strong global growth, we do not expect a repeat tantrum like we saw in 2013. At that time, EM economies were generally overheating and had significant external vulnerabilities. Despite fiscal spending and debt having increased since then, the shift towards local currency debt and longer dated debt has helped to reduce reliance on shorter term foreign capital flows in EMs. There are risks associated with higher debt burdens, but international capital markets have generally been open to EMs, helped by investor demand for higher yielding assets as they have also been open to EM corporates. Kirstie is a fixed income portfolio manager who specializes in emerging markets debt. She has 25 years of investment experience and holds a master's degree with honors in German and international relations from the University of St. Andrews, Scotland.