Insights: U.S. Corporate defaults have tripled: What you need to know | Capital Group

U.S. Corporate defaults have tripled: What you need to know

Well-known companies from Hertz, to Cirque du Soleil to U.S. department store giant, Neiman Marcus, are just a few that have recently filed for bankruptcy amid pandemic-induced lockdowns. With more bankruptcies on the way and sharply rising default rates, are high-yield investments worth the risk to your portfolio?

The good news is that decisive action by the Federal Reserve — including a corporate bond buying program means that a severe market selloff such as the one experienced in March is unlikely to return. And while no one can predict the future, high-yield bonds have held up well in the aftermath of previous recessions.

In the following Q&A, fixed income portfolio manager Shannon Ward shares her thoughts on the wave of bankruptcies and its impact on the U.S. high-yield bond market:

We’ve seen defaults in the U.S. triple from last year to a rate of 6.2%. What’s your expectation for the rest of the year?

The default rate has been very low for a very long time. The normal default cycle is around 3% per year, and it’s stayed below that level for multiple years. We are now seeing an upswing. I expect default rates to continue rising until next year. I wouldn’t be surprised if they hit the high single digits. As an active high-yield bond manager, that’s a big deal. I am trying to price and avoid defaults.

With COVID-19 shutdowns hitting businesses hard, companies have had to take on new debt, borrow on their revolving credit facilities and/or take advantage of government relief programs. But the longer the pandemic lasts, the more likely they will exhaust these pools of liquidity and be forced to negotiate a deal with their lenders or file for bankruptcy. 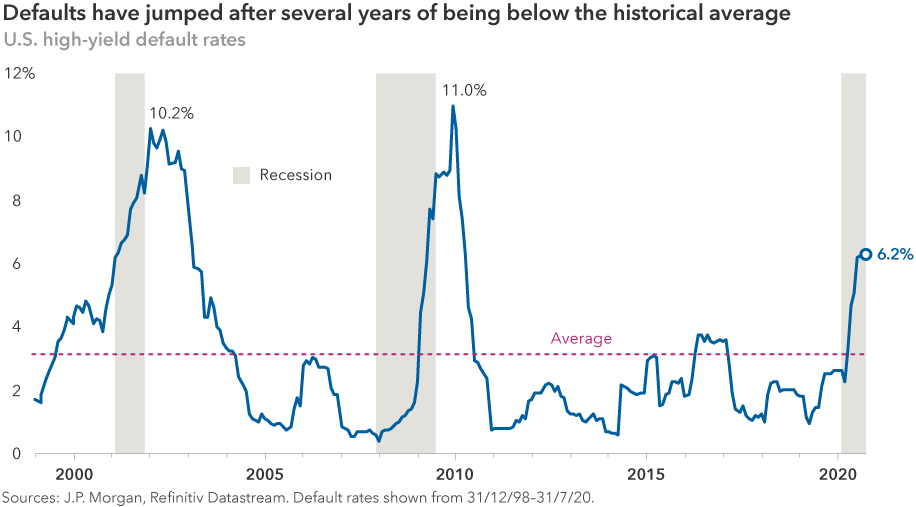 What industries are most vulnerable?

Not surprisingly, companies forced to cut back drastically because of the lockdowns make up a sizable portion of the defaults and bankruptcies we have seen so far. Think retailers such as GNC and J. C. Penney. Energy companies dealing with persistently low oil prices such as Chesapeake Energy are also examples.

These companies and industries have been on our watch list for some time as they were struggling pre-pandemic. 'Bricks-and-mortar' retail companies with large physical presences have been dealing with the massive shift toward e-commerce. In energy, there was considerable excitement around shale and fracking, and investors threw a lot of capital at these companies when oil prices were higher. But now that exuberance is coming home to roost.

It’s rarely just one thing. Defaults typically don’t happen with only one catalyst, it’s usually a number of things that push companies over the edge, and it depends on leverage. Many of the companies that defaulted recently took on a lot of debt over the past few years, so their defaults have been years in the making.

In a knock-on effect, commercial real estate companies that own shopping malls may also face some distress since they depend on rent payments from retailers to service their own debts. Smaller stores that count on mall traffic and don’t have a robust online presence have and will continue to experience headwinds as large anchor stores depart. 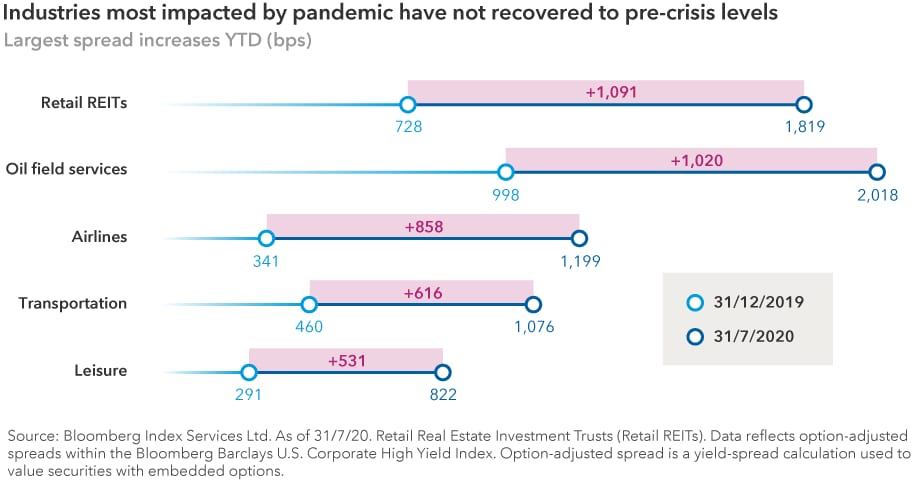 High-yield investments are so company specific. Can you provide an example of a company whose high-yield bonds did well?

Sprint is a case in point. The industry viewed the company as the weakest of the four U.S. wireless providers, and their over-levered balance sheet made it hard for them to invest in improving the network. Our view was that the company and its spectrum had strategic value and that the bonds were trading at too big a discount.

When investment-grade-rated (BBB/Baa and higher) T-Mobile agreed to purchase the company, and when they finally received regulatory approval for the merger to go through, their bonds soared in value. This took years to play out, and there were a lot of twists and turns along the way.

Can you cite an example of an investment that proved to be a disappointment?

As I mentioned earlier, regulatory approval for acquisitions can really move bond prices. In this case, I owned the bonds of a printing company that had agreed to merge with a higher quality competitor. The merger was widely expected to get regulatory approval, but it was unexpectedly deemed to be anti-competitive and so the transaction fell through.

The company’s performance suffered during the protracted period of uncertainty while the merger was under review by the government, and when the acquisition was called off the bonds dropped.

What happens to high-yield bond investors when a company files for bankruptcy protection?

The bankruptcy process gives companies time to deal with their debts and prevents lenders from taking action without court approval. Many are pre-arranged so that by the time the company files for bankruptcy, a plan of reorganization has been agreed to by creditors. The time leading up to the actual filing is when we as investors make decisions about what we want to do with the investment.

By the time they are in bankruptcy, we’ve generally already decided if this is a company that we want to stick with through the restructuring. We also are constantly reassessing our investment thesis as new information or events happen.

We can and have made investments such as debtor-in-possession financing to help companies through the bankruptcy process. We also own post-reorganization equity, or stock that we received as a form of payment as part of the court process. It’s not something we do regularly of course, but it’s one way to preserve capital.

Where are you finding opportunities in the high-yield market?

During the worst of the market collapse in March and April, there were a lot of opportunities in the higher rated high-yield issuers and so-called “fallen angels” (companies downgraded to high yield from investment grade). But most of these higher quality bonds have recovered to pre-crisis levels. The BB-rated market has grown to about 55% of the high-yield market as of July 31, 2020, so we are making investments there, particularly with new high-yield issuance up 48% compared to last year.

I’m also finding more opportunities lower in the high-yield ratings spectrum. Many of these companies will be able to manage through the pandemic but a lot of investors just don’t have the time, expertise, or mandate flexibility to invest in this area. Given the smaller base of investors, the market for lower rated companies is much less efficient, so there’s more opportunity to differentiate and find values.

But you must be careful because some of these companies may not fully recover. This is where our company-by-company and security-by-security approach to investing can shine. 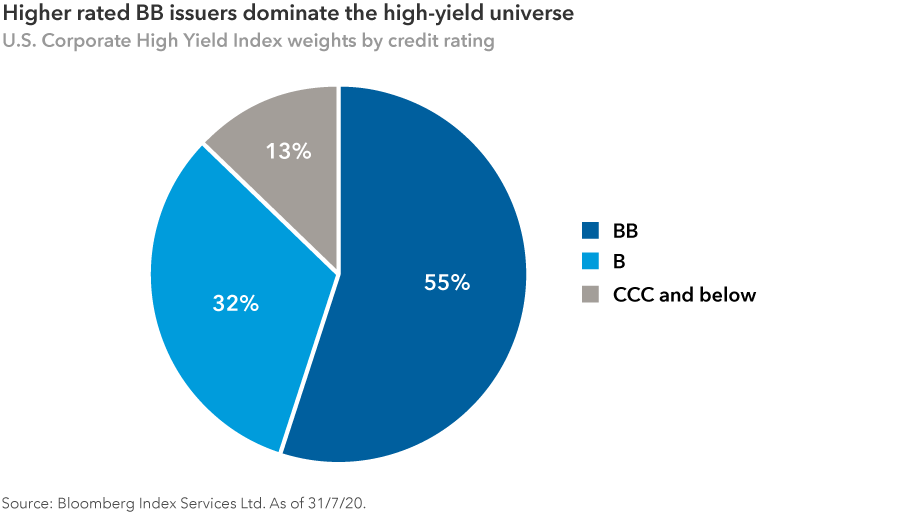 The Fed has been there to solve the systemic issues. They don’t want Treasury markets to seize up, mortgages to crash and large investment-grade companies to be unable to repay their debt. The bond-buying programs worked to reopen markets in April and helped many companies raise the cash they needed to weather the downturn. They also gave other lenders the confidence to lend, so the actual quantum of debt purchased by the Fed has been limited.

The Fed also has special programs for industries most impacted by the pandemic such as airlines and hospitals. One such program provides advanced payments on Medicare receipts so health care providers can get cash faster.

However, the impact of the Fed increasingly wanes as debt ratings decline.

What can we learn from the Fed bailout of auto and financial companies during the 2008–09 financial crisis?

Fed measures this time have been focused on keeping the markets liquid and allowing capital to continue to be provided. It’s not a direct bailout of companies like we saw then. The Fed is attempting to provide the support needed so public markets can bridge the crisis.

The big lesson in my mind is that instead of being there to pick up the pieces when big, systemically important companies fall apart, the Fed has been ahead of the game and came through early so whole industries don’t collapse. I think that’s a much better way to do it.

Are high-yield investors being adequately paid for the additional risks they’re taking on?

People understandably focus on headline events such as bankruptcies and defaults. But despite the default rate rising, defaults are unusual and deeply troubled companies make up a small subset of the high-yield universe.

Even with the rise in defaults, returns for the high-yield asset class have been robust these past few months. The high-yield index we track has returned 25.5% from the March nadir and is up 0.64% for the year, as at July 31, 2020. What does a rise in bankruptcies mean for people who are trying to save for retirement?

I view the impact of a rise in bankruptcies as having relatively little impact on most investors. Defaults affect a small part of the high-yield market, and many investors have small allocations to the high-yield asset class. Over time, the extra yield should compensate for the risk of default inherent in this asset class. That’s the “bargain” we’re trying to extract.