Insights: The world in 2030: Investing for the next decade | Capital Group

The world in 2030: Investing for the next decade

The world in 2030 may seem a long way away, but at Capital Group we spend a lot of time thinking about the distant future.

“Imagining life in 2030 is not a hypothetical for me,” notes Capital Group vice chairman Rob Lovelace, a sentiment echoed by many of his colleagues. “In the portfolios that I manage, my average holding period is about eight years, so I’m living that approach to investing.”

We asked our investment team to look in their crystal balls to envision how life may change by the end of the decade. Here are seven portfolio managers’ perspectives on the world in 2030, and how these shifting trends influence their investment decisions.

1. COVID could be this generation’s Pearl Harbor — Martin Romo

Ten years from now I think we will look back on COVID as our generation’s “Pearl Harbor moment” — a period when extreme adversity spurs innovation and behavioral changes to help address some of the era’s biggest problems. When Pearl Harbor happened, the U.S. artillery was 75% horse drawn. Let me say that again: In 1941, three quarters of the U.S. artillery depended on horses. Yet by the end of the war they had entered the atomic age. That incredible transformation sparked a period of innovation and growth in the U.S. economy that lasted for decades.

COVID could be the trigger that spurs us to tackle critical issues in the U.S. over the next decade, such as the cost of health care, education and housing. We’ve already seen an almost magically rapid development of COVID vaccines at a speed few thought possible. And we’re doing things in our daily lives we never imagined would happen this quickly.

In 2030 we may be living, working, studying and playing in a radically new world. Our lives could be better, richer, healthier, cheaper and profoundly more digital, virtual and data centric. Many of the technologies already exist, but I believe there's still so much untapped potential for innovative companies to think bigger and use them in ways that solve societal problems. 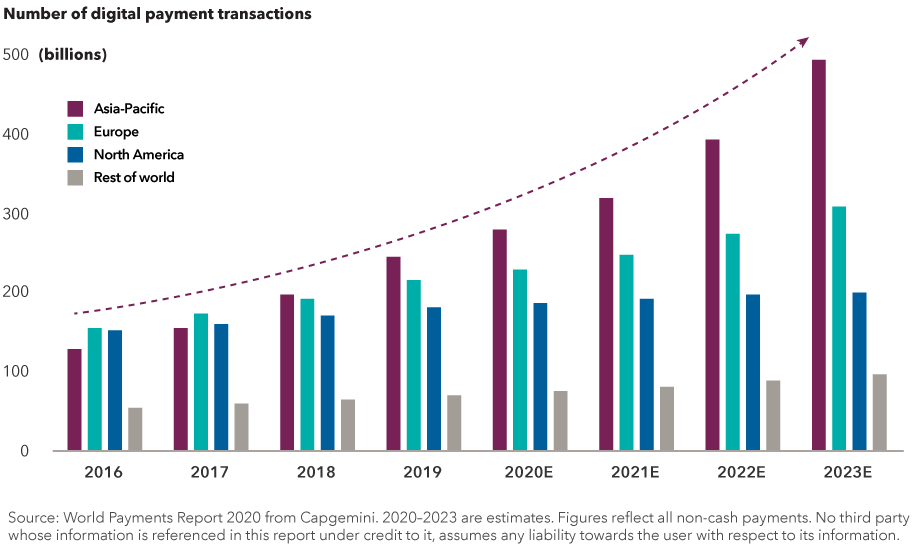 A decade from now I think digital payments will be the norm, and people will give you odd looks if you try to pay with cash.

We’ve seen this trend for several years in developing countries — where many consumers had no bank accounts but did have mobile phones and adopted mobile payment technology quickly. The pandemic accelerated use of digital payments around the world, including places where it hadn’t previously been ingrained in daily life. Once this crisis is over, I think a lot more people will be comfortable making digital payments, and they probably won’t feel the need to use cash as much as they did before.

As consumers become increasingly comfortable with the technology, companies with large global footprints could be poised to benefit. We’ve also seen strong growth in smaller companies based in countries such as Brazil that offer mobile payment platforms for merchants.

3. A cure for cancer may be around the corner — Cheryl Frank

A cure for cancer may be closer than you think. In fact, I believe some cancers will be functionally cured with cell therapy between now and 2030. New, reliable tests should enable very early detection of cancer formation and location. Beyond that, cancer could largely be eradicated as a major cause of death through early diagnosis.

Vastly reduced costs and scientific developments have contributed to phenomenal growth in medical research. We're in a renaissance period for R&D, and companies are investing aggressively to find unique ways to battle cancer and other illnesses. Genomics research and therapies derived from genetic testing have the potential to extend lives and generate billions of dollars in revenue for companies that develop them.

I wouldn’t be surprised to see increasing amounts of pharmaceutical innovation come from outside the U.S – which has historically been considered a leader in this field. In fact, I expect to see many blockbuster drugs from China by 2030. The country has the biggest population of cancer patients in the world, and it’s significantly easier to enroll those patients in clinical trials. I expect they will begin to produce novel drugs within five to 10 years and sell them at one-tenth the cost in the U.S.

Star Trek, the classic sci-fi TV series, depicted a far-off future where space explorers traveled the galaxies equipped with cutting edge technology such as the tricorder, a hand-held medical device that scanned a person’s vital signs, issued a diagnosis and prescribed treatment in minutes. While I don’t think there is going to be a single tricorder that does everything, I suspect that by 2030 many of us will have devices like it that will analyze blood, do cardiology monitoring and even remotely check our breathing while we sleep, some of which are available today.

We are already experiencing a massive wave of innovation and disruption across the health care sector that has the potential to drive new opportunity for companies, reduce overall costs and, most importantly, improve outcomes for patients. Breakthroughs in diagnostics will help lead to earlier detection of illnesses, which can help make drugs more effective — or in some cases treat disease before it progresses. One of the most exciting things today is something known as liquid biopsy, whereby a sample of your blood can identify a tumor at its earliest stages.

A broad range of traditional technology and medical technology companies have been working to develop home diagnostics for some time, and patients are now benefitting from their innovation. These are cost-effective devices that can collect all kinds of health-related metrics that not only help coach us to improve our own health, but can be immediately sent to our doctor for further consultation. We’re still in the early stages of development, but by 2030 it should be a routine part of our daily lives. 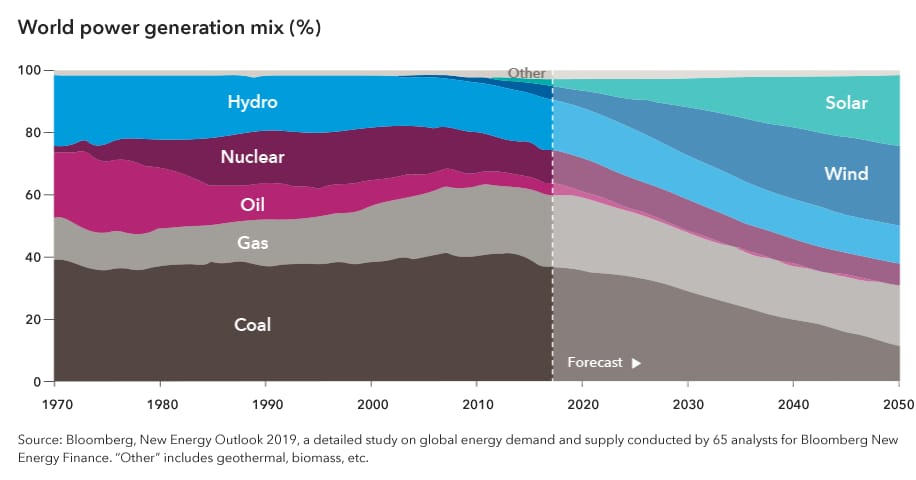 I believe we’ll see a dramatic shift towards renewable energy over the next decade. We are in the early stages of the transition to an electrification of the grid and green energy, and there are strong tailwinds that could drive growth through 2030 and beyond. Automation and artificial intelligence are setting the stage for a golden age in renewables — pushing costs down while boosting productivity and efficiency.

Renewable energy has historically been perceived as expensive, impractical and unprofitable — but all that is quickly changing. Some traditional utilities are already generating more than 30% of their business from renewables and are reaching an inflection point where they are being recognised more as growth companies rather than just staid, old-economy power generators and grid operators. The move towards renewables is most pronounced in European utilities, where their governments have set high decarbonisation targets. For example, the Renewable Energy Directive stipulates that a minimum of 32% of energy in the European Union should come from renewable resources by 2030. I think in 2030 we will have widely deployed fleets of autonomous electric vehicles operating in most major and many secondary cities around the world. Ownership of a personal vehicle will go from being a necessity to a luxury. Many people will still have vehicles — just like people ride horses or bicycles for fun. But personal vehicles will no longer be necessary as the primary form of transportation for most people in major cities.

This is an area that I believe the market hasn’t fully appreciated yet. Right now, the market leaders are embedded in other companies — such as Alphabet’s Waymo, Amazon’s Zoox or the Cruise division of GM — so investors can’t buy a pure-play autonomous driving company. But as these fleets roll out more publicly, the market should start to reevaluate these companies and realize this is a real business, not a science project.

I also think 2030 is when we're likely to see hybrid electric engines and hydrogen engines introduced into commercial aircrafts, with widespread deployment over the following 5–10 years. The impact on global emissions could be significant if we transition to a world where we've got huge fleets of autonomous electric vehicles on the road and aircraft transportation shifting from oil-based fuel to a mixture of oil, electricity and hydrogen.

My colleagues may be able to look at the future and imagine new products and trends, but I’d like to predict one thing that won’t be different in 2030. Despite all the change going on in the world, I believe the nature of my job and focus as a portfolio manager will be exactly the same.

In 2030 — just as we did in 2020 and 2010, and every year before that — we will come upon companies that do interesting things. We'll try to buy them at reasonable prices and hold them so that any returns we get may be better than if we were to buy all companies. Some companies will get it right and some will get it wrong. Our job is to find the companies most likely to get it right and create wealth over time so that our investors may benefit. Not that we’ll be perfect, but I'm optimistic that we can get more companies right than wrong and continue to add value for our clients. Martin is an equity portfolio manager with 28 years of investment experience. He is president of Capital Research Company and serves on the Capital Group Management Committee., He holds a bachelor’s from the University of California, Berkeley, and an MBA from Stanford.