Will the European economy rebound from a disappointing 2019?

Will the European economy rebound from a disappointing 2019?

It’s been another disappointing year for the European economy, even though 2019 is only three quarters done.

The United Kingdom is beset with Brexit uncertainty. Germany is teetering on the verge of recession. Protests in the streets of Paris until recently threatened to destabilise the French government. On top of all that, global disruption from ongoing U.S.-China trade tensions has weighed heavily on Europe’s export-dependent economy.

“I doubt many Europeans will be sad to see 2019 fade into history,” says Capital Group economist Robert Lind. “It’s been a tough year politically, economically and in the broader societal context.”

However, there is reason to think 2020 will be better, Lind explains. There are several important “ifs” in play: If a truce can be negotiated on the global trade front, if central bank stimulus measures do their job and if a Brexit resolution is finally achieved, those events could remove the large cloud of uncertainty that has hampered European economic growth in recent years. 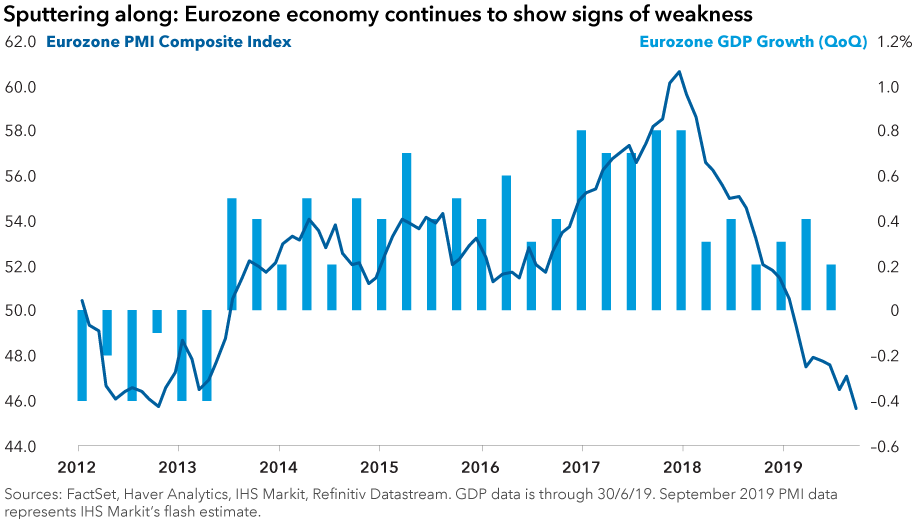 Stimulus on the way

“Broadly speaking, I think the European economy should gradually start to show signs of improvement in 2020 as some political risks begin to diminish and as looser monetary and fiscal policy work their way through the system,” Lind says.

The European Central Bank last month cut its key policy rate further into negative territory, from –0.4% to –0.5%. ECB officials also said they would relaunch a €20 billion per month bond-buying program in a bid to spark inflation and jumpstart the European economy. Many eurozone governments also have been loosening fiscal policy to help the cause.

Inflation has been running far below the ECB’s target rate of roughly 2% a year, and GDP growth has hovered around 1% on an annualised basis. That’s about half the growth rate of the U.S. economy.

Another unique challenge to the European economy: the U.K.’s bid to leave the European Union. The U.K. faces an October 31 deadline to approve a hotly debated withdrawal agreement, although it now appears likely that British lawmakers will seek another extension in the long-running Brexit negotiations.

Meanwhile, Germany is nearing a recession as the U.S.-China trade dispute hammers the German manufacturing sector, particularly the auto industry. Germany’s economy shrank by 0.1% in the second quarter and is expected to fall further when third-quarter data is released. A recession is commonly defined as two consecutive quarters of negative growth.

Since the ECB’s September rate cut, the euro has continued to weaken against the U.S. dollar, extending a strong dollar trend that has continued for years. On a year-to-date basis, the euro has declined more than 4% as negative interest rates in the eurozone (coupled with higher rates in the U.S.) have made dollar-based assets generally more attractive to investors.

The dollar is significantly overvalued against the euro, says Jens Søndergaard, a Capital Group currency analyst. Once that trend reverses course, he notes, it could provide a nice tailwind for euro-denominated assets.

Søndergaard expects the dollar to weaken in 2020–21 as U.S. economic growth softens, but he concedes that currency movements are notoriously difficult to predict. In the short term, the euro could fall further as the U.S. and European economies diverge.

“The relationship between interest rates and currencies has essentially broken down in a negative-rate world,” Søndergaard says. “We shouldn’t expect that correlation to return anytime soon. The more important drivers of currency movements today are relative bond flows and relative growth expectations.

“So, the big question is, can the euro rally when the U.S. economy starts to weaken?” Søndergaard asks. “That remains to be seen.” 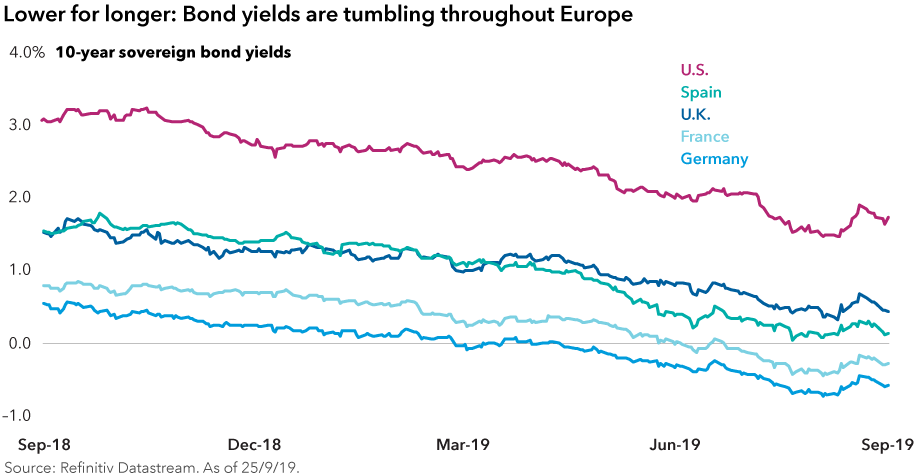 Despite the economic headwinds, or perhaps because of them, Europe is a classic stock-picker’s market, says portfolio manager Carl Kawaja. Investors can’t rely on robust economic growth to lift share prices, which places more emphasis on company fundamentals.

“Uncertainty creates opportunity,” Kawaja says. “We like it when things are a bit murky and difficult to figure out. In this type of environment, we are finding no shortage of compelling opportunities in Europe, both from a growth perspective and from a valuation perspective.”

On the growth side, Kawaja looks for fast-growing companies that are disrupting their respective industries. On the value side, he sees interesting opportunities in some hard-hit European auto companies.

It is important to note that although European stocks have continued to lag U.S. equity markets this year, European returns have still been solid on an absolute basis. Prior to the volatility of this week, in the first three quarters of the year to the end of September, the MSCI Europe Index was up around 14% in U.S.-dollar terms and close to 20% in local currency. By comparison, U.S. stocks have gained nearly 20% so far this year in U.S. dollar terms, as measured by the S&P 500 Index.

Although European economic growth has been disappointing so far in 2019, investment returns have charted a decidedly different course — which serves as a timely reminder that the economy and the stock market aren’t always on the same page. Carl has 32 years of investment experience, 27 with Capital Group. Earlier in his career, as an equity investment analyst at Capital, he covered global household products and U.S. personal care companies, along with Canadian companies. He holds an MBA from Columbia and a history degree from Brown. Jens has 13 years of experience, six at Capital Group. Earlier in his career at Capital, he worked as an economist covering the euro zone and the UK. Prior to joining Capital, he was a senior European economist at Nomura, a senior economist at the Bank of England and an assistant professor at The Johns Hopkins University. He holds a PhD in economics and a master's in foreign service from Georgetown.