Remember all the turmoil over the Florida election recount of 2000? The 2020 U.S. presidential election could make that dispute look quaint by comparison. In a year when seemingly everything has gone wrong, it is highly likely that the U.S. Presidential Election Day will add another element of uncertainty to a most uncertain time.

“I've been involved in presidential politics going back to the 1980s, and I have to say this is the most unusual election of my lifetime — and probably anyone’s lifetime who is alive today,” says John Emerson, Vice Chairman of Capital Group International, Inc.SM and a former U.S. Ambassador to Germany.

“We have a pandemic, an economic crisis, civil unrest in the streets and, in the middle of it all,” he adds, “a dispute over a Supreme Court appointment suddenly enters the mix.” The Senate Judiciary Committee is expected to begin confirmation hearings on October 12 for President Donald Trump’s nominee, setting the stage for a partisan battle three weeks before the election.

Adding yet another layer of uncertainty: Last week President Trump said he and his wife, Melania, had tested positive for COVID-19. It remains to be seen how that could impact the campaign but, at a minimum, it places the pandemic back at the center of the race. “Of course our thoughts are with the President and First Lady wishing them a speedy recovery,” Emerson says. 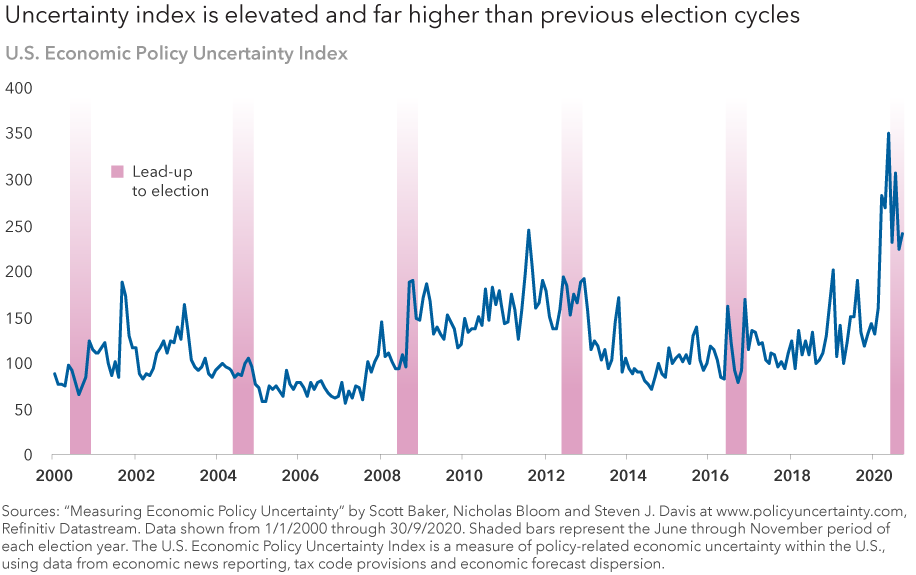 To put things in perspective, the U.S. Economic Policy Uncertainty Index — which tracks a mix of economic, policy and media-related uncertainty measurements — has hit unprecedented levels in 2020. Investors may be wondering: What could possibly come next?

Instead of an election recount which got the spotlight in the 2000 election — postal ballots could be the central issue this time.

Largely due to the COVID-19 outbreak, a record 80 million Americans are expected to vote by mail in this election cycle rather than visit the polls in person. That means election officials will be processing more than twice as many postal ballots as they did during the last presidential campaign in 2016.

Unless it’s a clear landslide for President Trump or former Vice President Joe Biden, “the outcome of the presidential election probably won’t be known for days or even weeks,” Emerson says, as states deal with the unprecedented volume of postal ballots. High levels of market volatility would likely accompany this period of uncertainty, he adds.

Moreover, Democrats are requesting postal ballots in much higher numbers than Republicans. This could set up a scenario where Election Day results appear to favor Republicans and then postal ballots — which take longer to count — shift the outcome toward Democrats. Either way, court challenges are a predictable outcome. 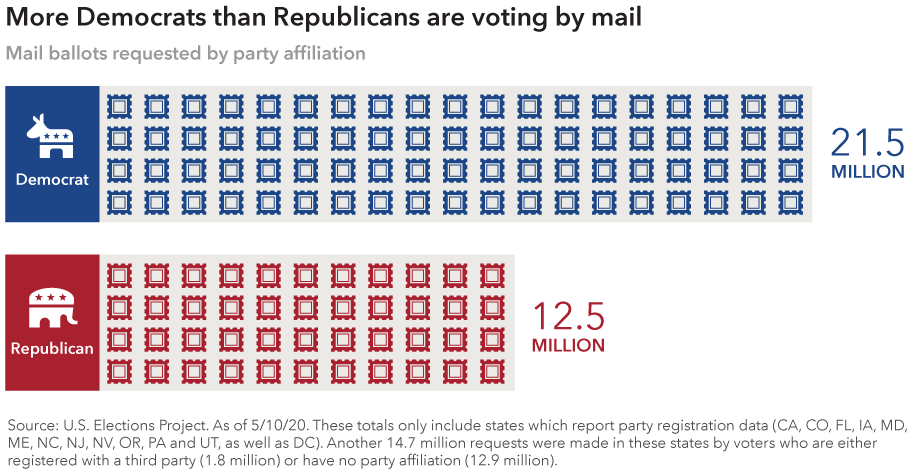 Expect the counting to continue well past Election Day

Some states don’t start counting postal ballots until Election Day. A few of them are key swing states where the presidential election could be decided, including Michigan, Pennsylvania and Wisconsin. By contrast, other swing states such as Arizona and Florida start tallying postal ballots two weeks and three weeks ahead of time, respectively, as the ballots are received.

In recent months the subject of postal balloting has become highly politicized. However, putting those partisan arguments aside, the simple fact remains that many states have never before handled such a high volume of postal ballots. Under the best circumstances, it will be a challenge to count the votes in a timely manner.

“We have to be patient,” says Reagan Anderson, a Senior Vice President with Capital Group’s government relations team. “Just because it takes longer to count the votes doesn’t mean there’s fraud involved. We may have to wait a while to ensure we get an accurate count so the American people can trust the validity of the results.” 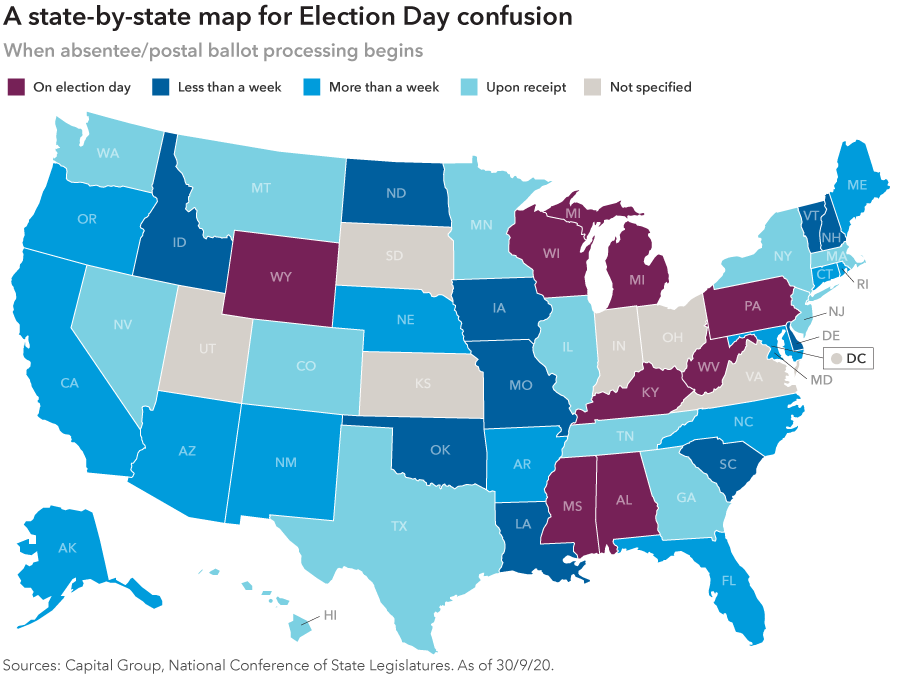 Will the U.S. Supreme Court step in again?

The disputed 2000 election was ultimately decided 36 days later when the U.S. Supreme Court, in a 5-to-4 vote, effectively ended recounting efforts in Florida. A key element of the decision involved a strict deadline: Under federal law, each state must determine its electors six days before the Electoral College meets.

That deadline was December 12, 2000 — an impossible task to meet if recounts were permitted to continue in Florida. The court handed down its decision that same day, and former Vice President Al Gore conceded the next day. In the closest election in U.S. history, President George W. Bush won with 271 electoral votes, one more than he needed.

Could the Supreme Court be called upon again? And will that deadline — this year it’s December 8 — play a similar role? Only time will tell.

For long-term investors, it’s important to remember that, historically speaking, the political power structure in Washington, D.C., hasn’t had much of a discernible impact on equity market returns. From 1933 to 2019, under unified and split governments, the average annual return for the Standard & Poor’s 500 Composite Index has fallen into a broad range from roughly 7% to 10%. A split Congress, as we have today, appears to be the market’s favorite choice, with a return of 10.4%.

• Investors should prepare for rising market volatility as Election Day approaches.
• Patience is key, as the outcome of the U.S. presidential race may not be known for days or weeks.
• The sheer volume of postal ballots means delayed results are probably inevitable.
• Despite the uncertainty, investors should remember that markets have moved higher even in turbulent times.