Tentative signs of optimism for Europe

Tentative signs of optimism for Europe

All things considered, the European economy has shown surprising resilience. Unemployment has been falling in most countries and rising wages along with lower headline inflation have boosted household real incomes. Governments have eased fiscal policy through tax cuts and increases in public spending. These factors have supported consumer spending and consumer sentiment continues to be robust. Economic indicators that help gauge activity levels, such as the Purchasing Managers Index (PMI) for services, have been relatively buoyant since the first quarter of 2019, while the same index for manufacturing activity (manufacturing PMI) has been relatively weaker. However, we could be seeing tentative signs of a turning point in manufacturing activity. There was a notable improvement in new orders in October 2019, and this, coupled with a fall in inventory of finished goods in both Germany and France, could signal a potential turning point in activity in the short term1.

Persistently low inflation and political uncertainty within the region remain key issues. Trade tensions and slower growth in China have put pressure on exporters, particularly Germany. Despite these headwinds, there are hints that the worst could be over with growth stabilising, albeit at lower levels.

Against this backdrop, how are European equities positioned?

While European equities have generated strong absolute returns over the course of 2019, they have still lagged their US equity counterparts. We have seen a similar pattern play out over the last decade. There are a number of reasons for superior index returns from US equities: a strong US dollar, political uncertainty and trade tariffs – just to name a few. Another factor is the way in which equity market returns are typically measured.

Comparing US and European equity index results on the surface level disguises some important details. European indices generally have a greater concentration of stocks in old economy sectors such as financials, materials and energy. Contrast that with the US, where technology and health care dominate. These latter sectors have rallied strongly and driven valuations higher.

European markets may not be heavily weighted with high-flying tech stocks, but they have no shortage of market-leading companies. A significant part of the health care sector is US-based, but Europe is home to large pharmaceutical companies Novartis, AstraZeneca and Novo Nordisk. In the consumer discretionary sector, France-based LVMH, Kering and Switzerland’s Richemont own some of the world’s most recognisable luxury brands. Furthermore, these companies are not solely reliant on the health of the domestic European economy, instead they are established multinationals that have significant markets in the US and Asia.

Compared with US stocks, European equities pay higher dividends (on average) as a proportion of their price and trade at lower valuations, meaning their share prices are lower when viewed as a multiple of their underlying earnings. These are attractive characteristics for investors who prefer to be more defensive in a late-cycle economic environment.

Given the potential for an improvement in the macroeconomic backdrop in Europe, the global nature of select European companies, and attractive valuations compared with their US counterparts, it is possible to find some interesting longer-term investment opportunities among European-listed equities. 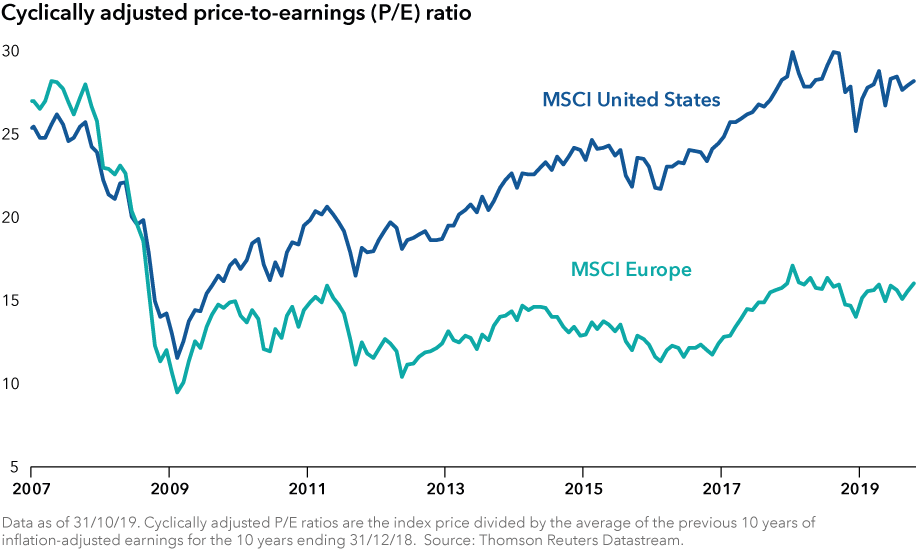