Insights: A look into the future of investing in Asia | Capital Group

A look into the future of investing in Asia

It has been more than a year since COVID-19 was declared a global pandemic. The start-stop lockdowns that followed the first wave of the coronavirus outbreak made it particularly tough for many businesses and individuals to adapt.

That said, global trade remains on the path of growth and development. In November 2020, 15 countries in the Asia-Pacific region signed the Regional Comprehensive Economic Partnership (RCEP) agreement. They include the 10 ASEAN members1 together with China, Japan, South Korea, Australia and New Zealand.

It may be considered early days before the long-term benefits of the trade agreement become apparent, but the RCEP agreement in itself has created the largest free trade bloc in the world. The RCEP member countries together account for close to a third of the world’s population and gross domestic product.2

China easily stands out among its RCEP peers due to its size. Being a key player in the global supply chain, China’s economic progress will have an impact on the future direction of the trade bloc and the global economy. Secular trends that are paving the way for growth in Asia

We have been paying close attention to the long-term secular trends that are emerging in Asia whilst developing a deeper understanding of the region’s unique demographic profiles.

These are areas where we found some of the more interesting secular growth opportunities:

Among the secular trends that will likely continue to flourish are the growth of digital platforms targeting large and growing consumer bases, particularly through mobile technology.

One potential beneficiary of digital adoption in India is Reliance Industries. The Indian conglomerate has built one of the world’s largest telecommunications networks, with a subscriber base of over 410 million3, in just a few years. In the financials sector, the larger private banks have been growing profits and gaining market share, partly by reaching new customers in rural areas through mobile apps. They are well-positioned to scoop up some of the country’s weaker lenders. 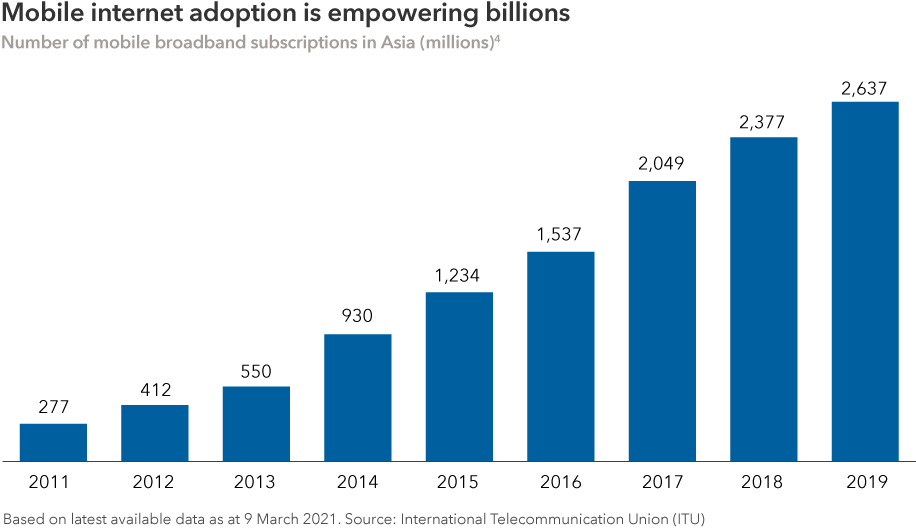 Asia-Pacific is expected to account for over 60% of global retail e-commerce sales in 2020, over three times that of the US.5 Although e-commerce in some Asian countries is at a higher penetration than the US and Europe, the total addressable market is far greater due to Asia’s larger, and growing population.

In tandem with e-commerce growth is the increased usage of digital or mobile payments in the move towards a cashless society. In places like China, South Korea and other Asian countries, tap-and-go payment apps have been widely used for years.

India, in particular, has witnessed a sharp increase in adoption of digital payments. Elsewhere, Singapore-based Sea Ltd is tapping into both the e-commerce and digital payments markets in Southeast Asia, where such services are in high demand from the young and tech-savvy population. Growth in biotechnology, with support from the regulators

Chinese leaders are seeking to cultivate a homegrown biotech industry. As an example, domestic start-up Wuxi Biologics has been enhancing its research and development capabilities to accelerate its discovery and manufacturing processes in biologics.

Equally notable, the government is allowing foreign drugmakers to tap into China’s vast market. Regardless of the push to bolster domestic businesses, Chinese leaders want their citizens to benefit from the most effective medications.

South Korea is also making efforts to promote its biotech industry. One of the companies that has thrived there is Rokit Healthcare. It created the world’s first sterile, all-in-one 4D6 organ regenerator, which it named Dr. INVIVO and has successfully tested its diabetic foot ulcers regeneration platform on patients in India.

The ripple effect from the revival in travel demand

Before the COVID-19 pandemic, around 150 million people in Asia travelled for the first time each year. Over the next 20 years, the region is expected to account for around 50% of incremental air traffic7, fuelled by the rapidly rising middle class population.

A revival in travel demand in Asia and other parts of the world could have a powerful ripple effect, creating the need for a range of goods and services and helping drive jobs growth across a variety of industries. Among these are aircraft manufacturers, jet engine makers, hotels, casinos and restaurants. In the absence of significant local players to respond to this demand, multinational companies like Airbus and Boeing could potentially benefit as the commercial aircraft duopoly can fill the gap when global air travel resumes. 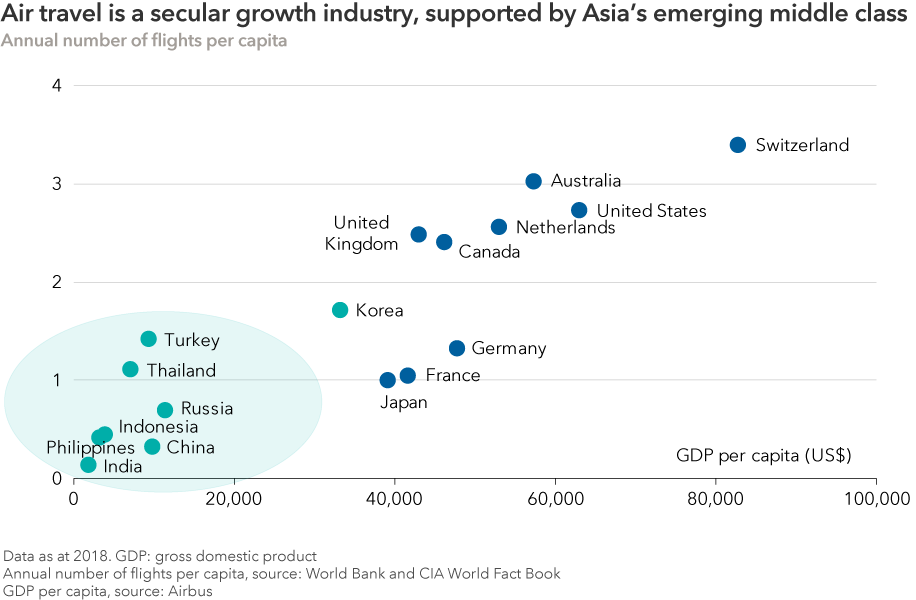 Thriving in a post-COVID world

Should investors expect more volatility in the years ahead? Many companies in industries that have been hit hard during the COVID downturn have seen a pick-up in valuations as markets priced in a global recovery on the back of the vaccine rollout.

In light of the current market environment, finding companies with the potential to continue generating solid growth in the future while supported by durable growth trends like digitalisation and global payments will be key.

However, a greater dispersion of company valuations can be expected when market volatility returns. When that happens, prudent stock selection will help investors identify the potential winners. Julie is an investment director at Capital Group. She has 27 years of investment industry experience and has been with Capital Group for five years. She holds a bachelor’s degree in business management with concentration in finance from Cornell University. She also holds both the Investment Management Certificate and the Chartered Financial Analyst® designation. Julie is based in London.