Remember when equity markets were skidding and the Federal Reserve was fearlessly hiking rates every quarter? That was just six months ago. So much has changed in such a short time.

Trade tensions have escalated, geopolitical risks have been rising and an increasing number of signals indicate the global economy could be losing steam. The Fed has responded with a dramatic turn in its policy, leading to a sharp rally in interest rates.

The benchmark 10-year Treasury yield dipped 72 basis points from its 2.79% peak in January to a low of 2.07% in early June. Market expectations now indicate interest rate cuts are coming. While trade disputes have dominated headlines, economic data has been weaker across the U.S., Europe and China. Industrial production has declined in China, falling to a 17-year low in early 2019.


Why the Fed pivot?

Just a year ago, the Fed appeared prepared to hike the fed funds rate well into 3% territory. But when equity volatility spiked in late 2018, monetary policymakers quickly changed their tune. The market expects the 2.5% fed funds rate established last year to be the peak for this cycle. What do we expect?

“It wasn't that long ago that the Fed was talking about three to four hikes in 2019, and now the market's pricing in two cuts in each of the next two years,” explains Mike Gitlin, head of fixed income at Capital Group.

The Fed’s dovish stance has spurred a broad-based rally across equities and credit assets. Central banks look to be taking a more aggressive tone on fighting against the next downturn, rather than merely accepting the inevitable.

Fed Chairman Jerome Powell implied as much earlier this month. He indicated that the Fed is ready to lower rates if economic indicators begin to deteriorate due to factors like trade disputes. “We are closely monitoring the implications of these developments for the U.S. economic outlook and, as always, we will act as appropriate to sustain the expansion,” he said.

The market appears to believe him: Following Powell’s comments, the 10-year Treasury yield dropped to a 20-month low.

Don’t be distracted by the yield curve.

One concern on investors’ minds is the yield curve. The spread between two- and 10-year Treasuries going negative — the curve inverting — often indicates economic stress or outright recession. Although the curve hasn’t inverted yet, it’s getting closer. 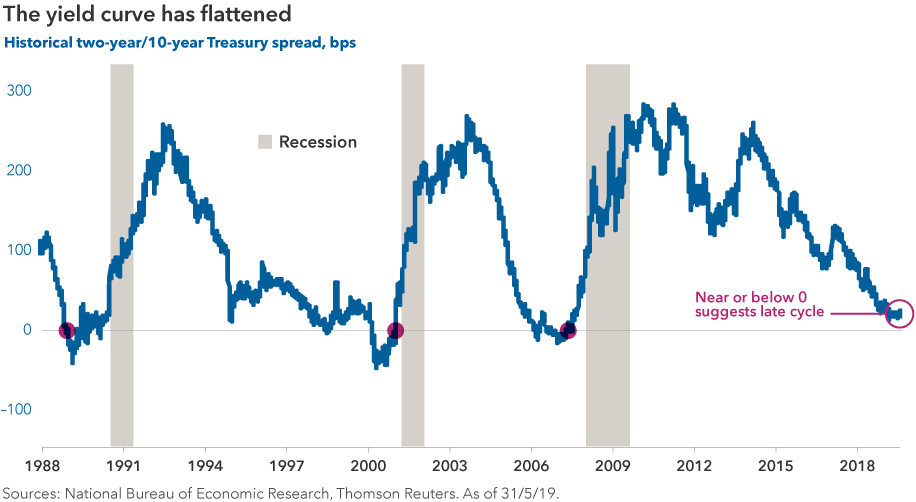 “With the Fed more open to rate cuts, and the possibility that tariffs could lift inflation, positioning portfolios for a steeper yield curve makes a lot of sense to me,” says portfolio manager Ritchie Tuazon.

One catalyst may be in the corporate credit market. "Investors have been worried about rising interest rates for most of the last few years," says portfolio manager Pramod Atluri. “But the cycle has turned. In this part of the cycle exposure to interest rates can actually reduce volatility and preserve the value of an investor’s overall portfolio. Instead investors may be better off to focus their attention on credit risk.

“For the last 10 years, companies have leveraged their balance sheets to make large acquisitions, buy back shares, increase their dividends and invest in their business," Atluri continues. "But when the credit market turns and the late cycle turns into a recession, some of these companies are going to find that their earnings stream won’t cover all the debt that they've issued. Investors who have been focused on interest rate risk and reached for higher yielding bond funds may find that their portfolios have large exposures to many of these companies.”

He adds that we’re facing an uncertain environment. “We don't know exactly what the next year or two will look like. With trade and the regulatory environment in flux, there will be winners and losers. And given today's rich valuations, investors are not being paid enough for the risks they are taking in many parts of the credit market.”