Insights: Which companies are faring well in the COVID era? | Capital Group

Which companies are faring well in the COVID era?

As a global equity manager at Capital Group, Jody Jonsson has witnessed the path of globalisation while living and working in Geneva, San Francisco, Los Angeles and London. She’s seen a lot in 30-plus years on the job, but never one quite like 2020.

Jonsson seeks out growth-oriented multinational companies that are benefiting from evolving global trade patterns. That may seem like a daunting task at a time when pandemic-induced lockdowns have brought the global economy to a near standstill.

How are multinationals navigating such a tumultuous economic, market and trade environment? Jonsson shares her view in the following Q&A:

Are you able to find compelling investment opportunities amid the unprecedented trade disruption we’ve seen this year?

Absolutely. The key is to remember that global trade doesn’t just involve physical goods moving from one place to another. Today, cross-border trade increasingly takes place online through digital transactions and services that are, in many cases, not subject to border restrictions and not hindered by transportation challenges. I look for well-managed multinational companies that can benefit from changing patterns in world trade, not simply the growth of world trade.

In the COVID era, a wide gap has emerged between companies with well-developed global e-commerce capabilities and those without the ability to rapidly conduct business online. While 2020 has certainly been the most difficult year I’ve ever seen in my investment career, it has also been one of the best years ever for large multinationals with efficient digital business models. In many cases, their growth has accelerated during the downturn.

Amazon, Alphabet, Facebook and Netflix are the names most people think about as the digital leaders, but there are also online payment processors such as PayPal, cloud-computing providers such as Microsoft and chipmakers such as Taiwan Semiconductor that have shown incredible resilience during a time of extreme market and economic volatility. In particular, I think digital payment processors represent an exciting opportunity because we’ve seen a sharp increase in “contactless” transactions.

Once this crisis is over, I think a lot more people will be comfortable making digital payments and they probably won’t feel the need to use cash as much as they did before. That’s a very good tailwind for companies like PayPal, Mastercard, Visa and MercadoLibre, among others. A decade from now, I think digital payments will be the norm, and people will give you odd looks if you try to pay with cash.

What is it about multinationals that makes them so resilient during uncertain times?

In my view, it's because — generally speaking — they are run by smart, tough, experienced managers who have navigated all types of trade environments, favorable and unfavorable.

For the most part, these are large, well-capitalised, battle-tested companies that can find a path to success, regardless of the headwinds. There’s a reason that multinationals have come to dominate the world economy. Strong global companies, in my view, will emerge from the pandemic even stronger than before. They are simply better able to weather the storm. Nothing we’ve seen in the COVID era has changed my view on that.

What other interesting investment themes have emerged during the pandemic?

Health care is obviously an area that is getting a lot of attention. All eyes are on the drug companies working to develop a COVID vaccine. But what I find even more interesting are companies that provide medical equipment and supplies, such as Thermo Fisher. We may not know which drugmaker is going to be the first to develop a safe and effective vaccine, but we do know they will need to buy the specialized equipment and supplies provided by lesser known companies in the health care sector.

In the traditional retail sector, which has been hard hit over the past seven months, there is ample evidence that strong companies are getting stronger. I would point to U.S. retailers Costco and Home Depot as examples. Retailers deemed “essential” and with the ability to meet skyrocketing demand have been able to increase market share. The longer the lockdowns continue, the more people get used to shopping at these places and likely will continue when the economy fully reopens. Nike is another company that has done extremely well by aggressively shifting more sales online. In essence, the COVID crisis has reinforced the strength of good business models.

Are the dominant multinationals based in the United States?’

The U.S. certainly has a large number of them, but investors who focus solely on the U.S. would be doing themselves a disservice. European equities, for instance, may have lagged U.S. markets on an index basis, but there are specific companies outside the U.S. that are world-class leaders. Nestlé, for instance — the world’s largest food company. And LVMH — the world’s largest luxury goods company. I don’t think about multinationals as U.S. companies, or French companies, or British companies, I think of them as global companies within a global opportunity set.

In emerging markets, it is much the same. Yes, there are fewer large multinationals, but their numbers and influence are growing. Over the past three decades, Taiwan Semiconductor has become the largest chip foundry in the world with an impressive list of customers, including Apple, Sony and Qualcomm. Many other countries, such as China, India and Brazil, are nurturing their own multinational giants that are providing serious competition for their U.S. and European counterparts.

With trade wars, the spread of populist politics and concerns about the virus, do you think the process of globalisation may be reversing?

I don’t see it as a reversal, I see it as multinational companies adapting to a changing global trade environment. In my view, companies will remain global in their production facilities and their customer bases, but they will increasingly build more local redundancy into their operations. I call it “multilocalization.” That includes bringing some parts of the supply chain back to the U.S., continuing to outsource other parts and establishing new production facilities in key areas around the world. This is another lesson we’ve learned from the COVID crisis — it’s critically important to have diversified supply chains. What’s your outlook for global equities in 2021 and beyond?

We’re long-term investors at Capital Group, so I try not to think about my outlook in terms of one or two years. That said, I think 2021 is likely to be a difficult transition period as the major economies of the world attempt to fully reopen while keeping the virus under control. As our in-house economists say, “the virus is the economy,” and until we get a vaccine, the path to recovery remains highly uncertain. We also have a pivotal U.S. election that may add to the uncertainty if the result remains unknown far beyond election night, as some political observers are predicting.

From an investment point of view, events such as these have little to no impact on my portfolio positioning. I’m looking for companies with potentially long growth runways and the ability to increase market share regardless of changes in the macroeconomic or political environment. The types of companies I favour are generally not that sensitive to near-term events, so I don’t spend a lot of my time worrying about the latest headlines. In fact, I think paying too much attention to that can be detrimental to successful, long-term investing. 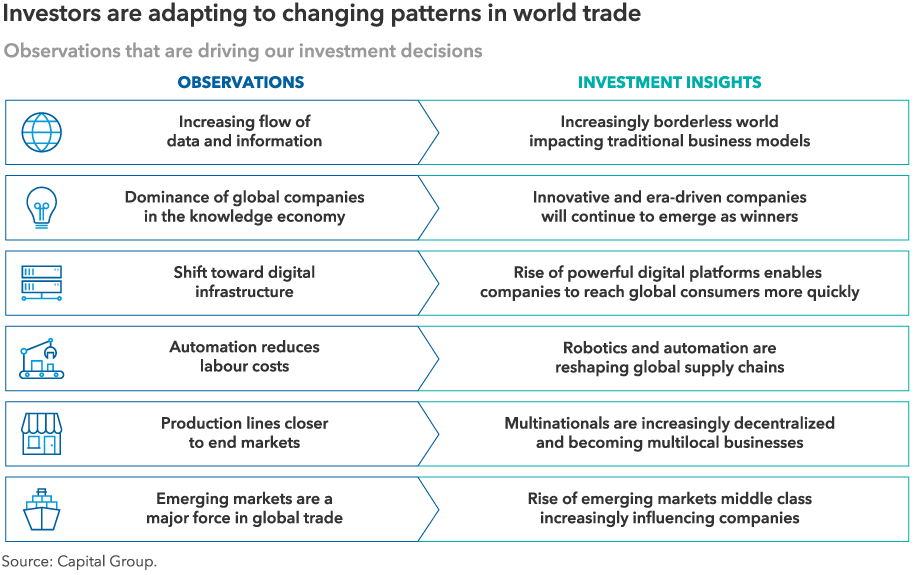 Ten years down the road, how do you think some of your major investment themes will play out?

Cloud computing is radically changing the way we do business and, 10 years from now, I think that will manifest itself in ways that we can’t yet imagine. I think health care will be far more personalized than it is today as we learn to pinpoint specific diseases, predict and even prevent them. I think we will all be commuting to work in autonomous cars — if we drive to work at all. I think many more of us will be working from home, perhaps even a majority of us. And I think it’s highly likely that most of us won’t have any “real” offices anymore, except the ones we’ve built at home.