The curtain is going up on China’s large domestic stock market, known to investors as A-shares.

China’s stock market has long been dominated by local retail investors. But that is set to change. MSCI’s decision to include a sliver of China’s A-share market in its emerging markets equity indexes is a small but significant step in further integration of China’s domestic market into global financial markets.

“It is a significant step, but in some ways the index providers are catching up to a reality that already exists,” says Capital Group vice chairman and portfolio manager Rob Lovelace. “Many investors including Capital have been investing in select companies in China’s domestic market,” he says, adding that “as the world’s second largest economy and stock market, China’s market should start to be integrated into developed global stock market benchmarks such as the MSCI World Index.”

As a corollary to that, the question that becomes pertinent is the extent to which China should continue to dominate the emerging markets. Currently, through shares listed in Hong Kong and the U.S., China already represents 28% of the MSCI Emerging Markets Index, a figure that could rise above 40% if all mainland Chinese companies are included. 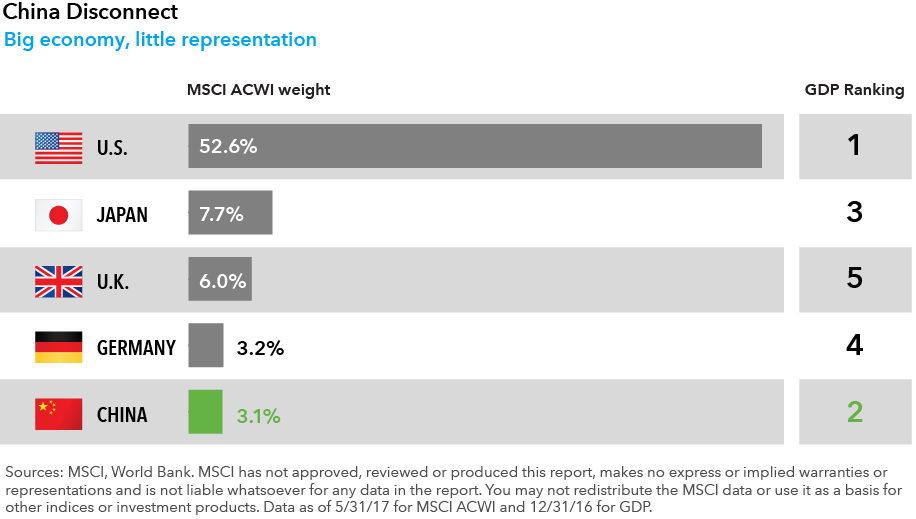 Boasting nearly 3,000 companies, China’s stock market is the world’s second largest behind the U.S. based on market value. Presently, China also makes up 3.1% of the MSCI All Country World Index.

Index-component maker MSCI Inc. announced on June 20 that it would include 222 mainland Chinese companies in its widely followed MSCI Emerging Markets Index, meaning shares of these companies will become more available to stock pickers and providers of index funds. This would usher billions of dollars into the market.

These large cap companies will comprise just 0.73% of the overall MSCI Emerging Markets Index by September 2018. They were selected because they are currently available through a special buying system set up in 2014 that connects the stock exchange in Hong Kong with those in China.

Yet the opportunity for more mainland Chinese companies to be added to the emerging markets index over time is a distinct possibility, especially if Chinese regulators adopt stronger corporate governance measures that conform to developed market standards and loosen their grip on capital markets access — long sticking points for index exclusion.

Over the years, drawbacks to investing in China have included share liquidity, transparency of management teams, regulatory hurdles and cultural barriers.

In many ways, China’s stock market is the sum of many parts. Technology companies such as Tencent and Alibaba are multinational technology giants that compete with the likes of Google and Facebook. There are the mid-sized private sector companies. And then there are state-owned conglomerates that represent the predominant share of the domestic A-share market.

Inclusion into MSCI is expected to heighten the scrutiny of China’s financial market.

“We started to study A-share companies in 2002 and began in investing in them in 2009,” recalls Capital Group assistant vice president Lisa Martinez, a member of a unit at Capital Group that analyzes operational issues associated with entering new markets. “Due to uncertainty over tax issues on capital gains, we didn’t file our first application with regulators to enter the market until 2006. While it was a lengthy process, I would say the regulatory environment has significantly changed for the better.” MSCI estimates the first wave of mainland Chinese stocks will lure $17 billion of international flows. In 10 years, China A-shares could draw inflows of $400 billion to $500 billion, some brokerages are estimating.

“Increased involvement by global investors should strengthen the level of corporate governance in China over time. With A-shares entering the MSCI indexes, trading volumes should increase and the market should become more transparent,” says Capital Group portfolio manager Steve Watson.

“There is a large discrepancy in terms of the quality of the companies we have met and their management. But I’m seeing that gap narrow each time I visit China. It’s a rich market with high quality companies in a range of industries, especially in the information technology sector where I have met a number of listed firms that are globally competitive in the products they produce,” Shaw says.

Such on-the-ground research was enhanced when Capital Group opened its Beijing office in 2009, staffing it with seven industry specialists who came from diverse professional and educational backgrounds, according to Capital Group China affairs director Susan Dietz-Henderson.

“Going forward, the team will dive deeper into their areas of coverage to scope out the investable A-share universe. Their initial focus will be to develop a baseline of companies, culling those that do not meet our investment criteria,” Susan says. “Being able to lift the curtain and do analysis on these companies in a systematic way will be of immense value to our decision-making process.”