Markets: Guide to recessions: What to look out for and how to prepare

Guide to recessions: What to look out for and how to prepare

“The stock market has predicted nine out of the last five recessions!” Paul A. Samuelson, 1966

Recessions can be complicated, misunderstood and sometimes downright scary. With the U.S. expansion nearly 10 years old and market volatility elevated, investors may be wondering whether the next recession is just around the corner.

In our view, we don’t believe a U.S. recession is imminent in 2019. But with the economy ﬁrmly in late cycle territory, we should be more aware about the possibility down the road.

The implications go much deeper than just the U.S. economy — the business cycle has very real consequences for portfolios too. Since equities tend to peak several months before the start of a recession, it’s never too early to start asking the right questions.


But let’s start with the most basic question: What is a recession?

Recessions occur when economic output declines after a period of growth. They are a natural and necessary part of every business cycle. The National Bureau of Economic Research in the U.S. (NBER) defines a recession as “a significant decline in economic activity spread across the economy, lasting more than a few months, normally visible in real gross domestic product (GDP), real income, employment, industrial production and wholesale-retail sales.” It is also commonly defined as at least two consecutive quarters of declining GDP.

Past recessions have occurred for a variety of reasons, but typically are the result of imbalances that build up in the economy and ultimately need to be corrected. While every cycle is unique, some common causes include rising interest rates, inflation and commodity prices. Anything that broadly hurts corporate profitability enough to trigger job reductions also can be responsible. When unemployment rises, consumers typically reduce spending, which further pressures economic growth, company earnings and stock prices. These factors can fuel a vicious negative cycle that topples an economy into recession.

How long do recessions last?

The good news is that recessions generally don’t last very long. Our analysis of 10 cycles since 1950 shows that recessions have ranged from eight to 18 months, with the average lasting about 11 months. For those directly affected by job loss or business closures, that can feel like an eternity. But investors with a long-term investment horizon would be better served looking at the full picture.

Recessions are relatively small blips in economic history. Over the last 65 years, the U.S. has been in an official recession less than 15% of all months. Moreover, the net economic impact of most recessions also is relatively small. The average expansion increased economic output by 24%, whereas the average recession only reduced GDP less than 2%. Equity returns can even be positive over the full length of a contraction, since some of the strongest stock rallies have occurred during the late stages of a recession. 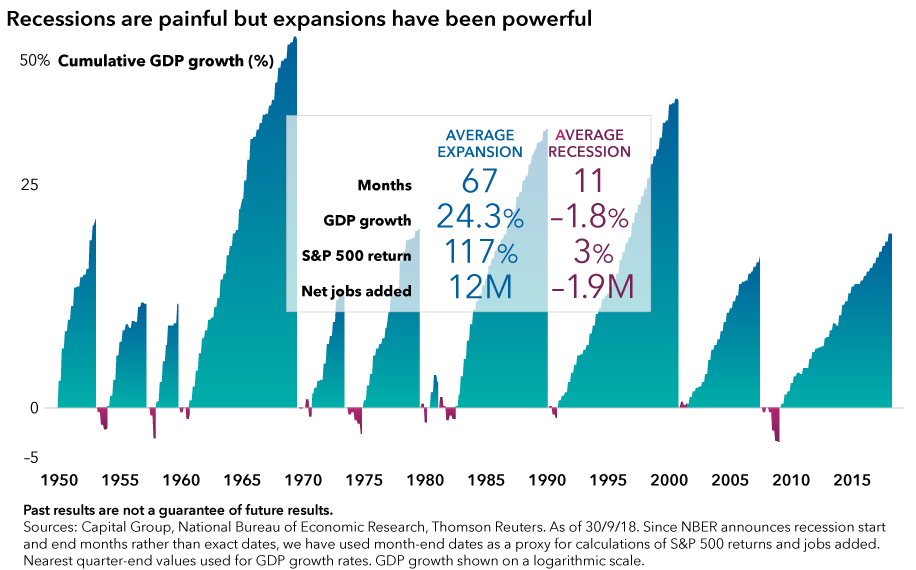 What happens to the stock market during a recession?

Even if a recession does not appear to be imminent, it’s never too early to think about how one could affect your portfolio. That’s because bear markets and recessions usually overlap at times, with equities tending to peak about seven months before the economic cycle. NBER doesn’t officially identify recessions until well after they begin. By then, equities already may have been declining for months.

Just as equities often lead the economy on the way down, they have also led on the way back up. The Standard & Poor’s 500 Composite Index typically bottoms out about six months after the start of a recession, and usually begins to rally before the economy starts humming again. (Keep in mind, these are just market averages and can vary widely between cycles.) Aggressive market-timing moves, such as shifting an entire portfolio into cash, often can backfire. Some of the strongest returns can occur during the late stages of an economic cycle or immediately after a market bottom. It’s often better to stay invested to avoid missing out on the upswing. 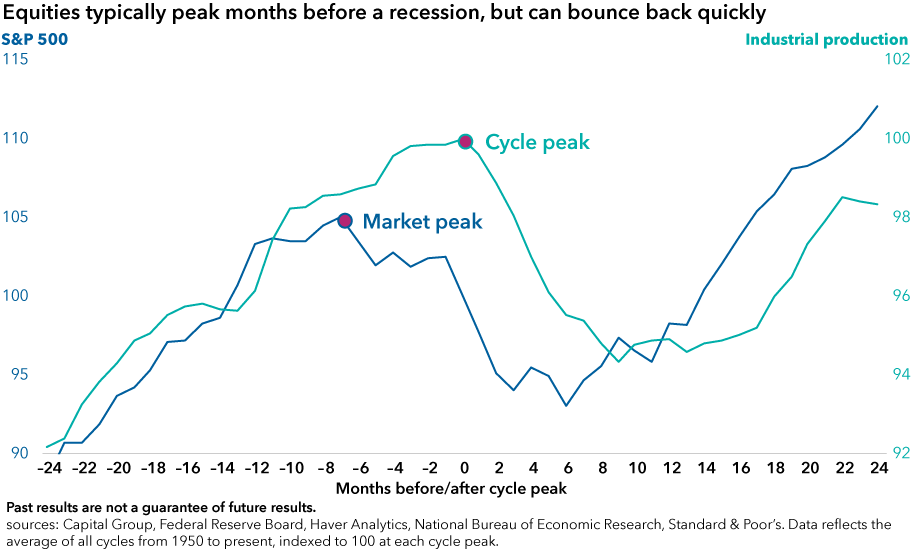 What economic indicators can warn of a recession?

There are some generally reliable signals worth watching closely as the economy reaches its late cycle, as shown in the chart below.

Many factors can contribute to a recession and the main causes often change each cycle. Therefore, it’s helpful to look at many different aspects of the economy to better gauge where excesses and imbalances may be building. Keep in mind that any indicator should be viewed more as a mile marker than a distance-to-destination sign.

These five factors provide a broad view of the U.S. economy. We have produced an e-brochure with a full report, where we take a closer look at each, aiming to answer three key questions:

• Why is the indicator important?
• What does history tell us?
• Where are we now?