Insights: Greetings from 2030: Growth investing for the next decade | Capital Group

Greetings from 2030: Growth investing for the next decade

Companies, Anne-Marie Peterson observed early in her investing career, go through life cycle changes just like people do. Where individuals can experience childhood, college, raising children and having careers, companies might go through periods of rapid growth, maturation, shifts in their competitive landscape and sometimes stagnation.

“Consider U.S. home improvement retailer, Home Depot, which you could say grew up too fast,” recalls Peterson, who got her start as an equity analyst covering U.S. retail companies. “They opened a lot of stores rapidly, without building the necessary back-end infrastructure, like supply chain management systems.” With the market saturated and growth stagnating, Home Depot continued to open stores. The company appeared to be reaching its breaking point.

An outsider, Frank Blake, was hired as CEO. “He had no retail experience but was a great listener and had a knack for making the complicated simple,” says Peterson. “He identified the problem, halted new store openings and set about fixing the supply chain on the back-end. In other words, he stopped growth to ultimately resume growth.”

Like many of her colleagues at Capital Group, Peterson’s early experiences as an analyst helped shape her approach as a portfolio manager. “Retail is a very idiosyncratic sector,” she explains. “What I learned covering retail is that people matter a lot, and growth can come in many forms.”

Peterson recently sat down with us to share her perspective on growth investing over the next decade and offer some predictions for what the world might look like in 2030.

What characteristics do you look for in a growth investment?

My underlying investment framework is driven by three key principles:

Revenue growth drives earnings, which in turn drive stock prices. My starting point is to look for above-average revenue growth as a path to long-term earnings growth potential. Take the cloud as an example. Last year Microsoft’s Azure and Amazon Web Services together generated about $60 billion in revenue, which represents a fraction of the $700 billion addressable market for corporate IT spending.

People matter. When I invest in a stock, I tend to look at it as underwriting a management team or culture, so I find it important to feel comfortable with a company’s leadership. In fact, I spend as much time trying to understand the people as I do the business and financial statements. For example, when I was evaluating e-commerce company Shopify, I met several times with Tobi Lutke, the company’s CEO, to get to know him. This is a special founder who is mission-driven and is working hard to ensure Shopify is a 100-year company.

Change is a key catalyst for growth. Sometimes a CEO change can be a major catalyst, as was the case with Frank Blake at Home Depot or Satya Nadella at Microsoft.

During periods of significant change, industry structures can shift — for better or worse. Some companies get stronger, others grow weaker or fail. There's uncertainty, but also an opportunity to identify what the market might be missing about a company’s prospects. And there are few periods of change more significant than the one we are living through now.

There are opportunities to find great long-term investments in any environment. The current period is no exception. Every market downturn is different. What’s interesting about the current period is that the disruptive tech and consumer companies that led during the expansion have continued to lead. Typically the market leaders going into a downturn haven’t led during or coming out of a downturn, but I think we are seeing a fundamental shift happening. 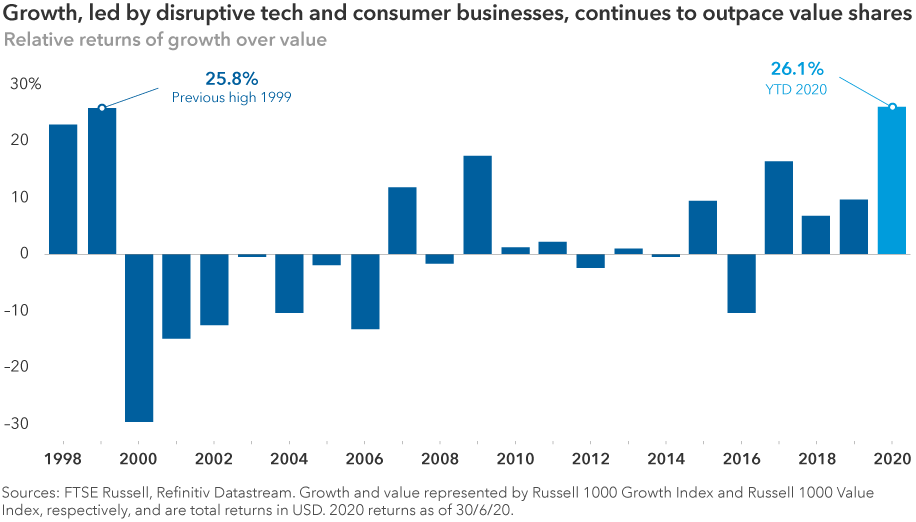 As at 30 June, the Standard & Poor’s 500 Composite Index was down 3.1% year-to-date, but that figure represents the sum of several individual companies. A look beneath the surface reveals a wide divergence of returns. On the one hand, there are those that have benefited from coronavirus-related demand, like e-commerce platforms Amazon (up 49%) and Shopify (up 138%), and streaming services like Netflix (up 41%). On the other, there have been a number of companies that have struggled, like United Airlines (down 61%), Royal Caribbean (down 62%) and Boeing (down 43%). So it's been a tale of the haves and have nots. And I think the key question for long-term investors is, which of these moves are enduring?

Which trends today have that potential to endure?

The headline is that COVID-19 accelerated the secular shift toward digitisation. As Shopify’s Tobi Lutke put it, “We are experiencing 2030 in 2020.” If the digitisation sailboat was cruising along with steady tailwinds before, the pandemic turned those tailwinds into strong gusts. And that sailboat turned into a speedboat and covered more ground.

I believe this represents the acceleration of a structural change that will be long lasting. Traditional TV’s scheduled programming and advertising model is more challenged than ever. Bankruptcies among retailers have accelerated, surpassing the global financial crisis, and I think more are coming. And while these shifts have been happening for a long time, what's interesting is that they're still in the early innings. In the U.S., e-commerce is growing rapidly but still represents only a fraction of total U.S. retail sales, and trails adoption in China and other markets. 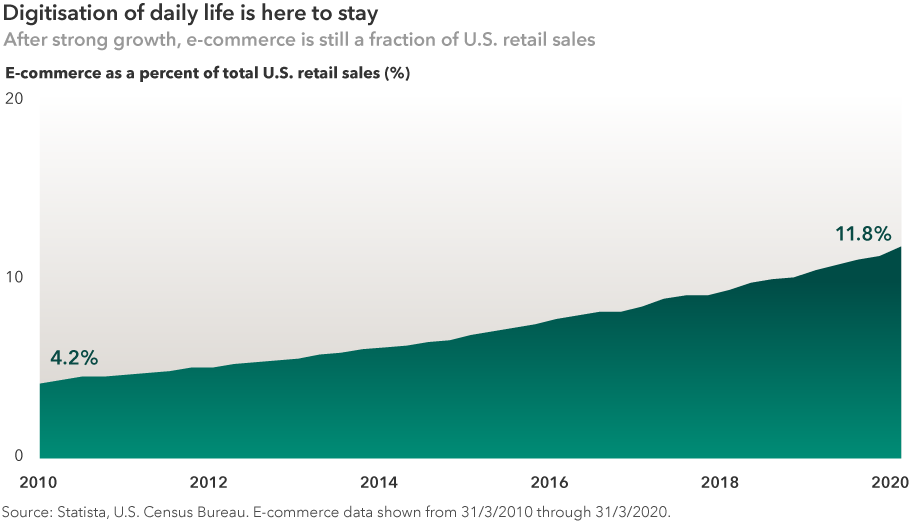 Payments provide another example. During the pandemic, many of us have been forced to pay for things digitally. It can be difficult to change a habit, but once you do it can be sticky.

Even with respect to the public sector, the digitisation shift is picking up momentum. In the U.S., many local government offices have fallen far behind the digitising curve. But companies like Tyler Technologies, a software developer founded in the 1960s, have been helping government agencies move their systems to the cloud, digitising processes like the issuing of parking tickets and even operating courts virtually.

What other sectors are experiencing these shifts?

In health care, the adoption of telemedicine, or online patient-doctor visits, exploded in March, a trend that I think is going to endure. Patients have had access to these services for a long time, but the adoption rate had been low. As a result of COVID-19, regulators and health care providers relaxed their rules to allow more digitisation. At the same time, patients and doctors, partly out of necessity, got more comfortable with remote appointments.

Jason Gorevic, the CEO of telemedicine provider Teladoc, recently said, "What we thought would take years to happen happened in a matter of months. This isn't an inflection point. It's a shift in the demand curve." This shift is also important news for patients. Where you see this digitisation happen, it's leading to better outcomes and lower costs.

You said growth comes in many forms. Can you talk about the types of growth you look for?

I try to look for companies whose products or services can make the world better, and a lot of the transformational change we are seeing today has that potential. I define growth more broadly than the traditional definition. I look for growth in three broad stages, depending on where a company is in its life cycle. 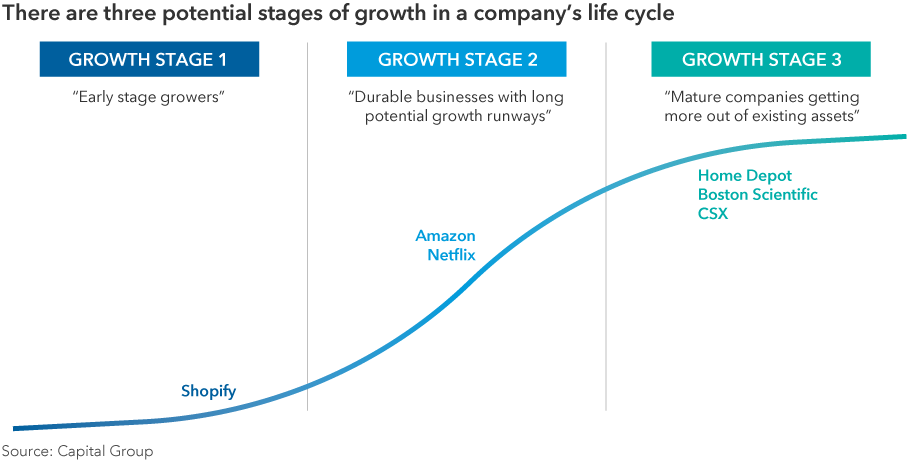 The first group is what I would call early-stage growers. These tend to be innovators whose offerings have the potential to disrupt existing business models. They often have potentially large addressable markets and their products are early in the adoption curve. A recent example is Shopify, which provides small merchants with resources for payments, customer engagement, shipping and marketing. While Amazon’s focus is on the end consumer, Shopify’s is on the small business owner. Its services enable small businesses to run their stores and websites for hundreds of dollars a month and to access consumers globally. Lutke, the founder, is a product guy — he developed his software originally to sell snowboards. He is on a mission to empower small merchants of the world.

Another example in this category is the aforementioned Teladoc, which has seen demand for its offerings rise as patients and doctors have gotten more comfortable with remote appointments.

A second type I look for are the durable franchises with long potential growth runways. Amazon could be considered an example. Platforms like an e-commerce site are strengthened by the number of participants. And sales beget more sales. As a result, they have more to invest in their technology. As I mentioned earlier, e-commerce today still only represents a fraction of total retail sales in the U.S.

A third growth category is mature companies able to get more out of existing assets, whether it is through a turnaround or an existing approach. A decade ago, Home Depot would have fitted into this category. Examples today might potentially include medical device maker Boston Scientific and railroad operator CSX Transportation.

How do you think the world will be different in 2030?

I think one of the most interesting things we could see in 2030 is a version of David and Goliath: the rise of the small business and the power of the individual over the large corporation. We are seeing a new wave of online software providers and e-commerce companies that are developing back-end infrastructure tools that have the potential to empower small- and medium-sized businesses. Historically, a big investment budget and big IT department would be needed to run a retail business.

The tools being developed today lower the barriers of reaching customers and managing inventory. Someone will be able to start a business, selling T-shirts around the world for example, in 15 minutes. Whereas the benefits of the first wave of online services developed by Google and Facebook accrued to a few big companies, I think the next wave of advances can lead to the dispersion of economic power and opportunity to smaller companies.

Similarly, in the health care sector, I think we will see the democratisation of health care. Today most of us don’t have immediate access to fluctuations in our cholesterol or heart rates. I think we'll see more remote monitoring that can connect to smart delivery systems of medication and other therapies.

We are seeing glimpses of it. Companies like Insulet and Dexcom are developing devices that enable remote monitoring and delivery of medication for diabetics. A decade from now this could be more broad-based and might include sending alerts to your doctor. With companies like Intuitive Surgical developing robotics for surgeries, these advances could converge to the point where remote medical devices and robotics will allow a specialist in Japan to perform a procedure on a patient in Nebraska. Anyone will have access to leading specialists, no matter where they live. The pieces are in place for this to happen, and all of this has the potential to improve outcomes and reduce costs.

The bottom line is that we are living in an incredible time of change. Change drives opportunity for active investors like us.

And at Capital, we have the luxury of thinking very long term. My bonus is mainly paid over an eight-year period, so I am truly paid to think about what 2030 will look like — or at least 2028. There are new emerging companies today that we may not hear about, but a decade from now will be household names providing value to their customers. Out of every crisis is born something good.

Anne-Marie Peterson is an equity portfolio manager with 25 years of experience. She earned a bachelor's in economics from the University of California, Irvine, and is a CFA charter holder.