The U.S. has led global markets over the past decade and it continues to dominate the investment landscape. With its continuing economic strength, many investors see this dominance continuing.

This does however risk missing out on a range of opportunities across other global markets. Whether it’s growth, dividends, or simply fundamentally well-run companies, international markets offer a lot of potential. We consider three areas here:

China’s vast middle class and increasingly wealthy upper middle class will continue to be among the top drivers of global growth.

In the past decade, China was busy building out the infrastructure of its economy and, as a result, drove global demand for commodities and all things industrial. It still maintains enormous influence on the industrial economy. But what’s more interesting are the evolving tastes of the Chinese consumer. Consumption in China has grown by at least 5% a year pretty consistently over the last 10 years. It is capital expenditure and exports that have been more volatile, hence the concerns around total GDP growth.

As the population gets wealthier, their priorities are changing. For example, infant nutrition, health and hygiene have become top priorities. That’s great for a company like Reckitt Benckiser, a Dutch British multinational that specializes in baby formula Enfamil and other personal care products. French food products powerhouse Danone is capitalizing on escalating demand for yogurt and other dairy foods in China. L’Oreal is another good example. The company has overcome a slowdown in Europe’s economies by tapping into the strong demand for cosmetics in China, India and other Asian markets. It has, in fact, managed to grow revenues by around 15% year over year. If you just think of L’Oreal as a France-based company, you are missing the point and the opportunity.

We can’t ignore Chinese consumers’ fascination with luxury brands like Gucci and Louis Vuitton. And in my opinion, the Europeans are the best at creating luxury brands. Kering is the French luxury goods company that owns Gucci as well as other celebrated names like Yves Saint Laurent, Alexander McQueen and Balenciaga. Focusing on the Asian consumer broadly and the Chinese consumer specifically, Kering grew top-line revenue by more than 25% in 2018 over the prior year.

In addition to following consumer demand patterns, we closely follow how corporate management is navigating these trends. Take LVMH Group, the holding company that owns, among many others, the iconic Louis Vuitton brand. The company has exhibited a highly disciplined management of its cash flow. It has redeployed much of its cash flow to expand its portfolio of brands while simultaneously pursuing a policy of growing the dividend initiated by the controlling Arnault family a dozen years ago. Many high-flying technology companies like Netflix and Facebook are in the U.S. But the so-called "nuts and bolts" of the internet are made in Europe and Asia. Taiwan Semiconductor Manufacturing (better known as TSMC) and Samsung make the majority of the world’s semiconductors. Dutch company ASML is the world’s largest supplier of lithography systems used to build semiconductors and machines used in the production of integrated circuits. Investing in stocks of these companies offers exposure to fast-growing areas of technology with a record of paying dividends, which has historically helped lower volatility and provide better downside protection in declining markets. TSMC and Samsung both have a dividend yield above 3% (as of June 30th). 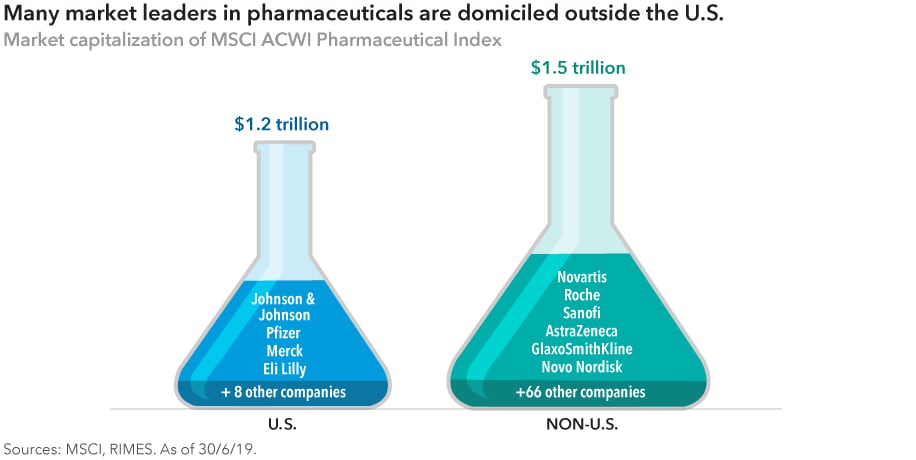 After I have decided that I like the fundamentals of a company, I always go back to basics, which for me is that a stock’s return is capital appreciation plus the dividend. The reality today is that dividend yields are higher outside the U.S., and capital appreciation may be higher than it seems on the surface. Many companies also have a strong culture of paying dividends — they are very focused on paying the cash flow back to shareholders. When I look at operating profit rather than EPS, the growth rates of many European companies are comparable to those in the U.S.

In the U.S. there is tremendous focus on buybacks to sustain a steady growth of earnings per share (EPS). There is less focus on operating profit and organic growth. Companies are taking on debt to buy back stock. As a result, the EPS grows much faster than the operating profit. That is not a common tradition outside the U.S. Certain companies do it, but on a far smaller scale and with less frequency. And even when they do, they don't often cancel the stock, so it does not translate to EPS growth.

Companies cannot borrow indefinitely to pay dividends. Nor can they take too much of the operating cash flow to pay dividends to shareholders because that usually comes at the cost of the reinvestment cycle.

A well-balanced company is one that is able to take some of its operating cash flow, deploy it to the needs of the business and then look at other sources of growth — be it through acquisition or otherwise. At the end of the day, there should still be some cash left to service a stable but growing dividend policy. There is a discipline both to the management of the business and the capital structure. In my experience, those companies that are able to balance both tend to have very good stock price evolution over extended periods of time. And those are the companies that I look to invest in for the long term Gerald has 28 years of investment experience, 27 with Capital Group. Earlier in his career at Capital, as an equity investment analyst, Gerald covered European construction building materials and European consumer goods companies. He holds a degree in international finance from the Institut Superieur de Gaston in Paris.

The world in 2030: Investing for the next decade
Featuring: Martin Romo & Jody Jonsson
The necessity of luxury: What makes this industry so resilient?
Featuring: Frank Beaudry
5 Questions About Investing in the Second Half of 2017
By: Capital Ideas Editorial Team