Economic data have confirmed the scale of the shock from the shutdowns to contain the coronavirus. Eurostat reported that eurozone real GDP fell by 3.8% in the first quarter, with notable weakness in France, Italy, and Spain. Manufacturing and services PMIs plunged in April and recovered only modestly in May. Manufacturing activity in the eurozone is now as weak as it was following the global financial crisis. Service sector activity has dropped to historic lows, implying GDP could fall by 10%-20% in the second quarter.

With a partial reopening of the eurozone economy, most forecasters expect a recovery in the second half of 2020. Even so, we are unlikely to see a full return to pre-virus activity levels as forecasts show the eurozone’s GDP shrinking by 8-10% in 2020 before rising by 4%-6% in 2021.1

For optimists, the huge economic shock of the coronavirus shutdown has exposed the limits of the eurozone's policymaking institutions and may force politicians to make changes, with the establishment of a fiscal union to support the monetary union. For pessimists, the scale of the economic shock could trigger an existential crisis for the eurozone and the wider EU, leading to fragmentation and perhaps even the collapse of the entire project.

The European Commission recently proposed a €750 billion recovery fund to support those countries most badly affected by the pandemic. The 27 member states will now have to agree on the details of the fund, which could take some time. But with strong support from Germany, which is prepared to make a substantial financial contribution, the fund could mark an important step towards closer integration in the eurozone and the wider EU. 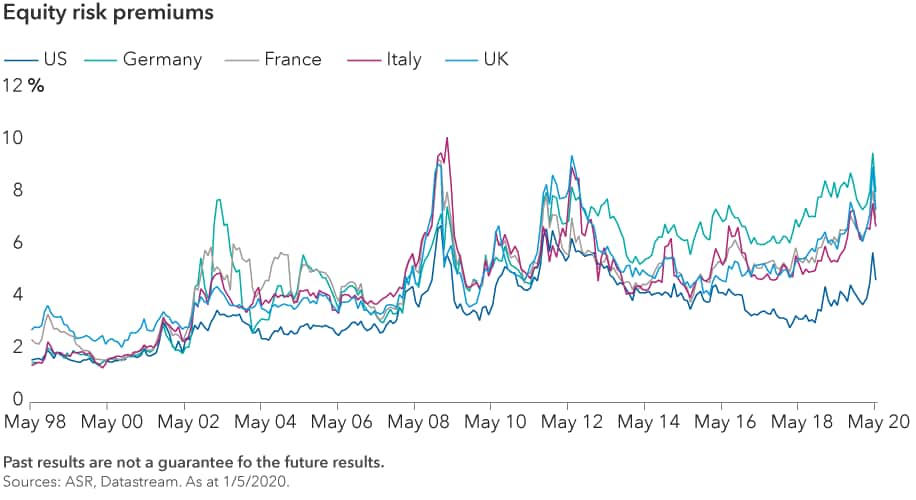 Despite this challenging backdrop, it is possible to find some interesting longer term investment opportunities among European-listed equities. European stocks look cheap compared to other markets. Furthermore, many of these companies are not solely reliant on the health of the domestic European economy, with many having global businesses and diversified revenue streams.

Many European companies have a significant amount of their business outside Europe and the key drivers of their earnings growth may be more geographically diversified than the domestic European market. For example, there are luxury goods, consumer staples, alcohol and beverage companies and retailers that have the potential to benefit from rising wealth creation across a host of Asian countries. Their dominant position and expertise in building powerful brands gives these companies almost unmatched pricing power. Two examples are Kering, the parent company of Gucci, and LVMH, which has become one of the world’s largest luxury goods companies through organic growth and acquisitions. Spirits companies are another example of a global revenue stream. European conglomerates Diageo and Pernod Ricard together own more than 200 spirits brands.

Against this backdrop, a long-term approach to the investment decision-making process with on-the-ground research and a focus on value can make a meaningful difference.