Much of the debt has been used to fund dividends, share buybacks and acquisitions. In many cases, these actions are helping to inflate reported earnings and share values.

So, what does this mean for companies, investors and the economy? Could this binge on cheap debt be the road to the next recession? Capital Group’s investment team is closely watching three key signals.

1. Not all dividend payments are sustainable

One important lesson I learned during the global financial crisis in 2008 and 2009 is to avoid companies with a lot of debt this late in the cycle. Companies with significant debt service face a number of challenges. For example, some companies today are issuing debt to buy back shares and pay their dividends, rather than using free cash flow. I have also seen some companies that have typically increased their dividend every year that have yet to do so over the past year. And in many cases, these have been the companies with a lot of leverage that are concerned about paying down debt. We have seen this with some of the food companies. It suggests that sales growth is tougher in this late-cycle environment.

2. Sooner or later, excesses will be recognised

At this point in the cycle, companies appear to have become more comfortable with taking on debt.

Debt has been an engine for dividends and share buybacks as well as the significant amount of acquisitions that have been a hallmark of this long cycle. A look at data for U.S. companies in aggregate, shows that since 2013, dividends and stock buybacks have generally exceeded free cash flow generation. Companies have filled that funding gap through debt issuance, thanks to low interest rates and easy access to debt.

Companies cannot spend more than they make indefinitely. A look at interest coverage ratios ― which measure a company’s ability to service debt ― paints a picture that is reminiscent of 1998–1999, a period of elevated leverage shortly before a recession. History, of course, does not necessarily predict the future, but experience navigating similar periods can be informative. 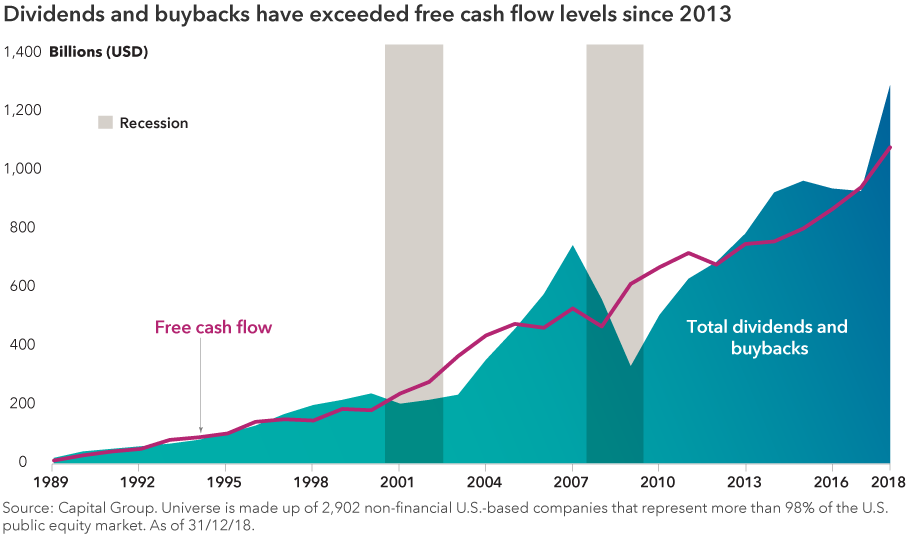 To be sure, in many cases companies have been borrowing prudently and investing capital efficiently. But it is important to be aware of the companies that have taken on excessive leverage and be mindful of the risks associated with this behavior. Being able to distinguish between those groups of companies will serve investors well when we enter tougher parts of the cycle.

3. Is the BBB bond market a systemic risk?

This late in the cycle, I think it’s prudent to take a cautious approach to corporate debt. The market appears to be on high alert, ready to pull back on any hint of negative news. The upcoming U.S. presidential election is amplifying uncertainty around the trade war with China, Brexit, and Fed policy.

The good news is that companies have borrowed at very low interest rates and, on the whole, they have been somewhat disciplined about the debt they’ve taken on. What’s more, corporate profits have increased significantly in the past decade. Profitable companies generally have ample free cash flow and can easily make interest payments when they’re due. The low interest rate environment and drive to increase shareholder value have contributed to more companies willing to operate with higher debt loads. 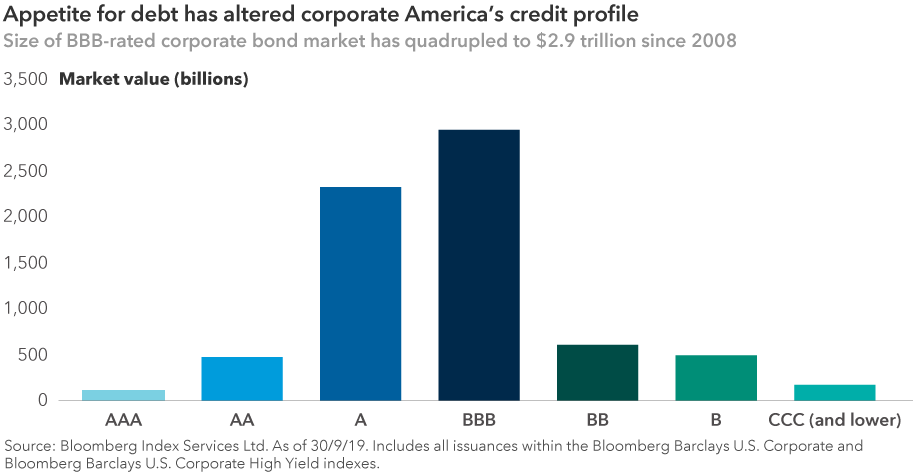 Although an imminent recession seems unlikely, the rise in BBB-rated corporates suggests that the next downturn may see a record number of downgrades to high yield due in part to the larger size of the market today. That would likely cause BBB and BB credit spreads to widen dramatically.

A wave of downgrades may also make it more difficult for investors to buy and sell bonds, because available dealer liquidity has not kept pace with the growth in the market. This could also contribute to corporate credit spreads widening.

Of course, credit spreads (the yield gap between corporates and Treasuries) may also widen even if downgrades don’t pick up. Significantly weaker economic data, geopolitical shocks or other escalating signs of recession could also be triggers. Because investment-grade companies tend to be under-researched on the credit side, volatility has a silver lining: creating attractive entry points for selective investors such as Capital. David has 19 years of investment experience, 17 with Capital Group. Earlier in his career, as a fixed income investment analyst at Capital, he covered brokerage, media, paper and leisure companies. He holds an MBA from the University of Chicago and master's and bachelor's degrees from Stanford. He is also a CFA charterholder. Dane has research responsibility for global accounting. He has 19 years of investment experience, four at Capital Group. Prior to joining Capital, Dane was an accounting analyst at his own firm, Dane Mott Research LLC, and at J.P. Morgan and Bear Stearns. He holds an MBA and bachelor's degrees from NYU. Dane is a CFA charterholder and CPA.