Artificial Intelligence: The Age of Automation Has Arrived

Artificial Intelligence: The Age of Automation Has Arrived

Industrial robots have been around for decades and they’ve pretty much had the robot space to themselves. Recently, however, that has changed: Agribots, service robots, robo-advisors, drones and co-bots are now part of automation’s landscape. Soon, more descendants of industrial robots will be rolling, or walking, out of laboratories and into the real world. It’s been predicted for years, but the coming age of automation is starting to happen now thanks to advances in sensors, hydraulics and artificial intelligence, mostly in the field of machine learning. 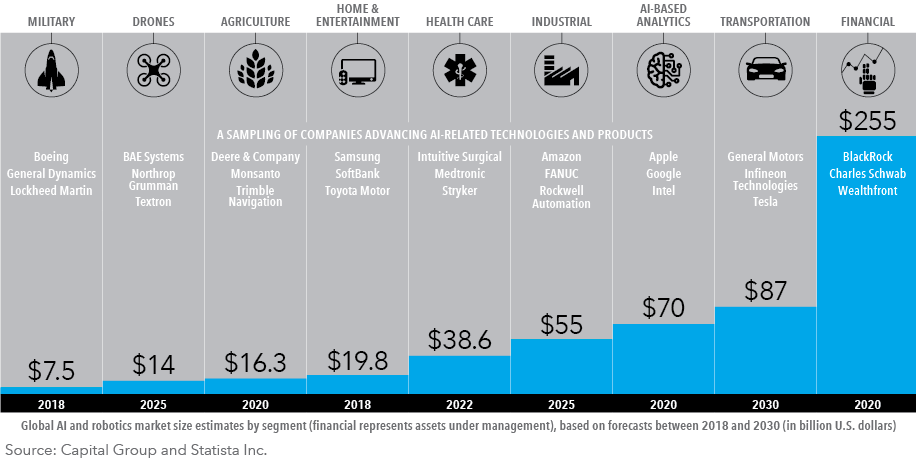 The accelerating pace of automation has sent robot sales soaring. Between 2010 and 2015, sales of industrial robots increased 16% a year. In 2015, nearly 254,000 industrial robots were sold worldwide. Still, only about 10% of manufacturing is done by robots. By 2025, robots will account for 25% of manufacturing. This paradigm shift potentially may be among the most disruptive in history, with the possible displacement of human labor presenting a profound challenge for business and society.

Robo-advisors are an example of technological disruption in wealth management. These machines provide online and automated portfolio management services. This is done through the use of algorithms, meaning human involvement is kept to a minimum. Though new and untested, and clearly lacking in the human touch a financial advisor provides, robo-advisors are becoming increasingly widespread. Estimates vary considerably, but assets controlled by robo-advisors could grow to more than $250 billion by 2020.