Insights: 10 investment themes for the next 10 years | Capital Group

10 investment themes for the next 10 years

Join us on a journey to 2030, as we imagine the change that will take place over the next decade in the investment landscape. To get there, we asked three Capital Group investment professionals to offer their perspectives on the themes shaping the future for investors:


1. The big will keep getting bigger

When it comes to market share in the digital era, size matters. It’s a theme affecting many industries but is perhaps most obvious in online advertising where Google (Alphabet) and Facebook control 37% of the market. This is in sharp contrast to the fragmented days of 2007, when the top two competitors combined for just 4%. “Because of their size, they are driving the best returns for advertisers. They are growing by driving more usage and showing more relevant ads — not by raising prices,” says equity analyst Brad Barrett, who has been covering media and internet companies for 19 years.

High barriers to entry and scale advantages that favour global instead of regional players are two reasons this trend will likely continue into the next decade. “There is also now a very tight feedback loop related to a company’s service quality and the scale of its business,” explains Barrett, who believes network effects can be extremely powerful. Consumers tend to prefer social media sites that already have a large and growing user base. Search engines provide better results when more people use them. And the bigger a streaming platform gets, the more it can reinvest in content, helping lower costs and attract even more users.

“We’ve experienced two years of growth in two months,” said Satya Nadella, CEO of Microsoft, referring to the great acceleration in demand for cloud services during the pandemic. Capital Group equity manager Cheryl Frank agrees. “I think an ever-larger number of companies will go cloud-first or cloud-only,” says Frank, who has spent years covering software companies. She notes that with global information technology spend around $3.7 trillion, even a moderate increase in companies switching to the cloud could have a massive impact on the bottom line for market leaders.

This is another case where the big get bigger and the well-entrenched — such as Amazon’s AWS and Microsoft’s Azure — are likely to maintain staying power. The barriers to entry, switching costs and the ecosystem effects are significant, making it tough for new players to reach competitive scale. Frank also expects the big cloud providers to influence the tech supply chain, based on what they decide to produce themselves and what to outsource. Vendors who supply equipment needed to grow data centers, such as CPUs, batteries and cooling equipment, may become vulnerable as a result.

If you think the most innovative companies are in the U.S., think again. When it comes to innovation, large U.S. tech companies seem to get most of the attention. But that conversation may shift toward what’s happening in China and other emerging markets, says portfolio manager Chris Thomsen.

“We’re going to see emerging markets companies move towards becoming true innovators,” says Thomsen. “We used to refer to companies like Alibaba as the ‘the Amazon of China’ or Baidu as the ‘Google of China’, but these companies have really developed and localised their technology, while accelerating their growth in ways different from the U.S.”

Thomsen also notes that successful new entrants may scale more quickly than older companies, likely long before they become household names outside of local markets. “Consider Pinduoduo, which is an e-commerce company in China that is less than 10 years old but has already surpassed a $100 billion market cap. Likewise, the $150 billion multi-service platform Meituan has over 450 million active users. There are going to be a lot more of these cropping up across industries.”

4. The prognosis looks good for a cancer cure

A cure for cancer may be closer than you think. According to Frank, breakthroughs in gene therapy and new applications of artificial intelligence are accelerating drug development. “I believe some cancers will be functionally cured with cell therapy between now and 2030. New, reliable tests will enable very early detection of cancer formation and location. Beyond 2030, cancer could be largely eradicated as a major cause of death through early diagnosis.”

The next wave of pharmaceutical innovation may come from an unexpected place, suggests Frank. “I expect to see many global blockbuster drugs from China by 2030. The country has the biggest population of cancer patients in the world, and one in two of them enrolls in a clinical trial versus one in 20 in the U.S. I expect they will begin to produce novel drugs within five to 10 years at one-tenth the cost of the U.S.”

Pharmaceutical companies have been in the spotlight as they race to develop treatments for COVID-19. But one of the biggest shakeups in the health care industry may be happening on a more personal level. Just a few months ago, the idea of meeting with a doctor through a laptop screen may have seemed impractical, impersonal and ineffective. But after months of social distancing, many of us have had our first telehealth experience and realised it works.

Frank, who has covered the health care industry for 21 years, believes this could be a tipping point that leads to a vastly different landscape by 2030. “I believe the combination of telehealth, at-home diagnostics and medicine delivery will enable almost everything to become treatable from home. Personal devices will use this data to help us improve our health, while physical doctor visits may evolve to be only diagnostics and procedures. Wearable and implantable technologies will essentially become an extension of ourselves.”

The shift to streaming content is another consumer trend that got turbocharged as a result of COVID-19, but Barrett thinks this is just the beginning. “Roughly one-third of all content consumption is currently done over streaming platforms, but by 2030 I think that’s going to increase to more than 80%.”

Even if consumers moderate their TV bingeing in a post-COVID world, the trend toward streaming will likely remain in place. This is great news for platforms like Netflix, Amazon Prime Video and Disney+ that could continue to see robust subscriber growth. “It’s an enormous market. TV continues to dominate people’s leisure time. And it’s shifting rapidly from linear to streaming. You have this incredible combination of streaming being both better and cheaper than traditional television, and I don’t see that changing,” adds Barrett.

7. Artificial intelligence could spark the next tech revolution

No need to fear the rise of the machines. Machine learning — which is a form of artificial intelligence in which computer algorithms improve themselves in real time by processing tons of data — is already all around us. “Machine learning is now core to the entire online ecosystem. It drives recommendation engines we see on platforms such as Facebook, Netflix and Amazon, which can influence much of our social and commerce experiences,” Barrett notes.

From speech recognition to fraud detection the applications are vast, and computers are getting smarter and more capable every day. “Because they can access enormous amounts of data, the algorithms and computing power are at a place where they can teach themselves in ways that were never possible,” Barrett explains. “I think image recognition is one area where computers have already surpassed humans.”

8. Self-driving cars may rule the roads

AI is also driving advances in autonomous vehicles. And unlike most of us, Brad Barrett has already ridden in self-driving cars — and lived to tell the tale. “They're incredibly precise. Their lane centering and turning is probably already better than ours,” Barrett states, based on his experience riding in autonomous vehicles from Google and Zoox, a startup that Amazon offered to purchase for $1.3 billion earlier this year.

The world could look vastly different if autonomous vehicles eat into the 15 trillion miles that are driven annually. “There are big implications for land use, energy consumption, real estate, the ways cities are designed — really for everything.”

A world where self-driving cars rule the roads sounds like science fiction today, but Barrett believes we’re closer than many may think. “The foundation is already there. There are no new technological breakthroughs that need to happen. Real people are already riding in these vehicles with no safety drivers,” Barrett concludes. “Ultimately, I think it's going to be cheaper and safer, and you're not going to have to pay attention to the road. That's a pretty compelling value proposition.”

9. ESG could be a pillar of portfolios

Socially responsible investing has been around for years, but a desire for asset managers to screen companies with an ESG lens has risen in 2020. “As we sit in the middle of a pandemic with the renewed rise of calls to eliminate social injustice, there’s no question that ESG will be a major investing theme over the next 10 years,” says Frank. 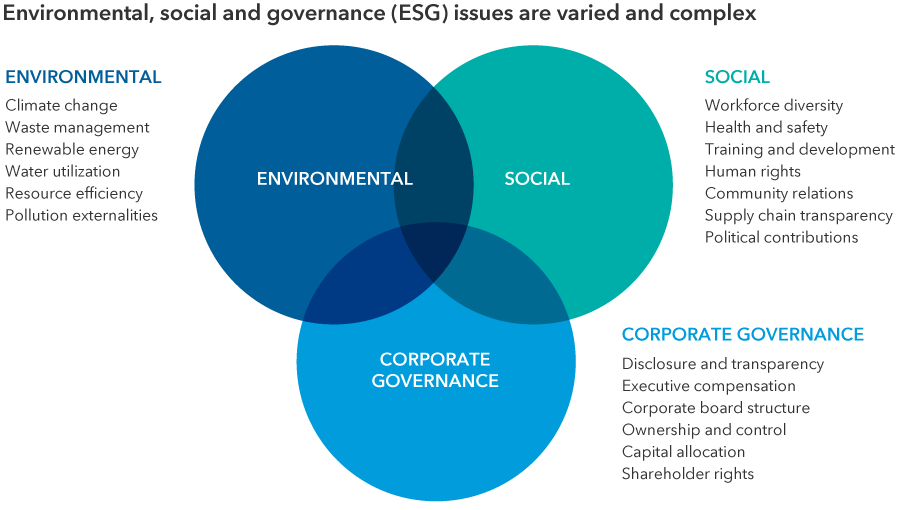 Companies that are more environmentally focused and promote diversity may appeal to consumers that increasingly prefer to align with businesses that match their personal values. Strong corporate governance could potentially reduce investment risk due to improved transparency and better capital allocation. Those are but two reasons why businesses with a focus on ESG may appeal to investors like Capital Group.

Screening for ESG factors has long been a part of Capital Group’s investment process, which is rooted in deep fundamental research and building relationships with company management. Capital Group president Rob Lovelace explains, “We look for companies with a long-standing focus on corporate governance. We hold them to high standards of governance and goals of operating in the best interests of investors, employees and society.”

10. The U.S.-China rivalry may define geopolitics

In what feels like a lifetime ago, trade disputes between the U.S. and China were the biggest economic storylines in the pre-COVID era, but Thomsen cautions that the frosty relationship between the two superpowers should remain one of the top investment themes over the next decade.

“It’s not just geopolitics. It will also have a direct impact on businesses as they are forced to take sides and perhaps adjust the way they operate on both sides of the fence,” says Thomsen. Earlier this month, the U.S. issued executive orders to ban popular apps TikTok and WeChat if the U.S. segments are not sold by their Chinese-owned parent companies.

While he prefers to avoid those that may get caught in the crossfire, he still believes great investment opportunities abound. “Purely domestic Chinese internet companies, for example Alibaba and Baidu, aren’t going to be hurt by a trade war. I also look across industries at innovative startups led by amazing entrepreneurs.”

Long-term thinking is built into the Capital System

Imagining life in 2030 may seem like daydreaming, but this type of long-term thinking is baked into The Capital SystemSM and is a major part of our investment process. Our investment team’s compensation is largely based on an eight-year time frame, which is unique in an industry that tends to focus on short-term returns. It’s this long-term perspective that enables us to look past market volatility and maintain conviction in companies that could change the world over the next decade. 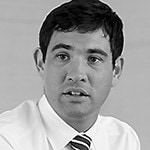 Brad is a research director with 19 years of investment industry experience. He covers media, cable and satellite, advertising-driven internet companies and telecommunication services in the U.S. Brad holds a bachelor's in economics from Claremont McKenna College. Cheryl is an equity portfolio manager with 21 years of investment industry experience. She holds an MBA from Stanford and a bachelor’s degree from Harvard. Chris is an equity portfolio manager with 22 years of investment experience. He holds an MBA from Columbia and a bachelor’s in international economics from Georgetown.