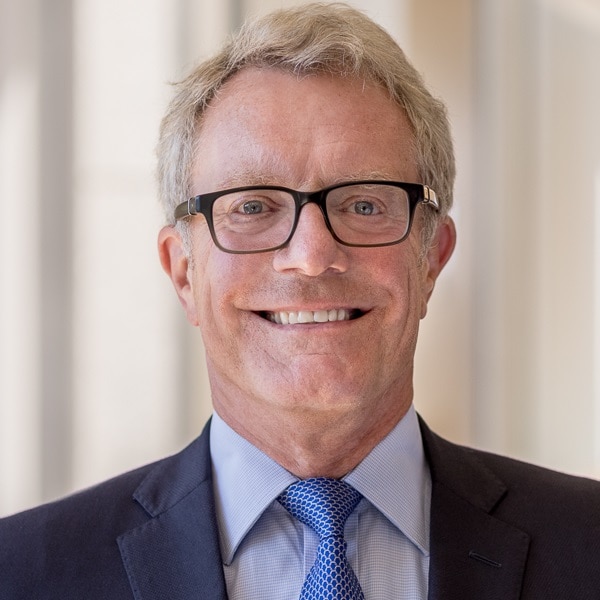 Ten years of resilient U.S. equity markets have left many investors wondering how much longer this bull can keep running. A sharp downturn in the fourth quarter of 2018 offered a glimpse into the dark eyes of a bear market, but investor sentiment quickly reversed as the Federal Reserve hit the pause button on its monetary tightening plans and U.S.-China trade tensions appeared to ease.


Since then, several key market indexes have returned to all-time highs. Where do we go from here? Can the U.S. continue to outpace other markets? When will international markets catch up? How will China’s slowing economy affect the global outlook?


March 9 marked the 10th anniversary of the U.S. bull market. Can it continue?


Rob Lovelace: The strong markets certainly returned with force this year, and I believe that is sustainable for a period of time. Every bull market comes to an end eventually, but right now the fundamentals remain healthy at many of the companies that have led markets higher since 2009.


In December, we ran an interesting exercise to test our conviction. With the S&P 500 Index down almost 20% — essentially bear market territory — we asked all of our equity analysts if the fundamentals had deteriorated enough to justify a 20% decline at the companies they cover. With very few exceptions, the answer they delivered was, “No.” That’s when we concluded that the fourth-quarter pullback was a buying opportunity for select companies we view as attractive long-term investments.


NPF can invest anywhere in the world, but international stocks have lagged U.S. markets by a substantial margin in recent years. How to do you address that issue?

David Polak: If you look at index returns, it’s true that the U.S. has been the best place to invest over the past decade. But a more interesting way to look at it, and the way we look at it, is on a company-by-company basis. For example, if you go back to 2009 and consider which stocks were in the top 50 each year on a total return basis, you might be surprised to find out how many of them were non-U.S. stocks.

Nearly every year of that period, most of those top 50 companies were located outside the United States. So if you had decided to ignore international equities, you would have missed a shot at many of the best opportunities. We don’t invest in countries, or regions, or economies — we invest in companies. 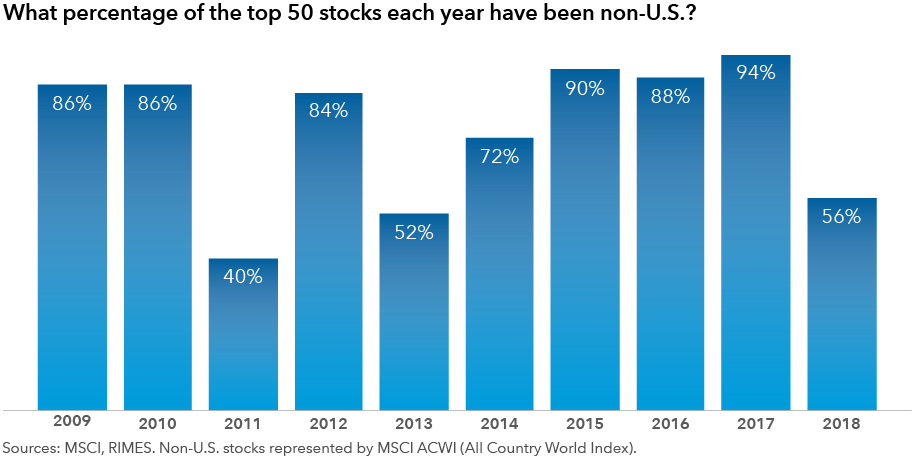 Why does the picture look so different on an index level?

Lovelace: It has a lot to do with the components that make up the indexes. In Europe, for example, many of the largest companies in the European indexes are financial service providers, banks in particular. Banks have not done well in recent years as weak economic growth in the eurozone and negative interest rates have hurt profitability. In contrast, many of the largest components of U.S. indexes are technology or e-commerce companies such as Amazon, Apple, Microsoft and Alphabet, the parent company of Google. As we all know, they’ve done quite well over the past few years.

So, looking at it simply on an index basis, the U.S. enjoys a powerful tailwind generated by a number of very strong companies on the cutting edge of technological innovation. Europe doesn’t have as many attractive companies in those areas, and the index returns reflect it. Europe has some incredible health care and luxury goods companies — including AstraZeneca, Novartis, LVMH and Kering — but it doesn’t have the equivalent of a Facebook or Netflix.


That said, I do believe international equities will reassert themselves at some point. And there are specific European multinationals in which we remain highly confident, including Airbus, in part due to its duopoly status with Boeing as the world’s two largest aircraft manufacturers and, given its dominant position as the world’s largest food company, Nestlé. Both of those companies stand to gain from a fast-growing middle class in emerging markets from China to Brazil.

U.S. equity valuations are relatively high compared to Europe, Japan and many emerging markets. Are you concerned about a valuation driven downturn in the U.S.?

Polak: I would not count out the United States. Valuation differentials aren’t as pronounced as they may seem when you consider that fast-growing non-U.S. companies are often just as highly valued as fast-growing U.S. companies. Investors place a premium on companies with strong earnings growth, innovative products and the ability to take market share from their competitors. Those types of companies command a high valuation, no matter where they are located in the world.

Overall, the U.S. premium isn’t as great as you might think when you look at comparable, growth-oriented companies in Europe and Asia. In addition, the U.S. — and to some extent China — has the technology giants Rob talked about earlier, and that can have a big impact on the overall valuation picture as well. Companies such as Amazon in the U.S. and Alibaba in China can distort that picture, given their dominant positions in the marketplace and resulting rich valuations.


China’s economic growth slowed to a nearly 30-year low at the end of 2018. Against that backdrop, what’s your outlook for Chinese equities?

Lovelace: China’s economy has been slowing for years. That’s not a new development. The government appears to be purposely limiting credit growth and other areas in an effort to avoid excesses building up in the economy. I don’t think the situation will get much worse from here.

The Chinese stock market will continue to be driven by increasing foreign investment, particularly as index providers such as MSCI add more Chinese companies into the relevant benchmarks. Many of these companies have existed in China for a long time, we just didn’t have access to them. That is changing rapidly, and it’s one of the things that keeps me excited about investing in Chinese companies over the long term.

One of the hallmarks of NPF is a concept called The New Geography of Investing®. What is it and how does it fit into your investment approach?

Polak: The New Geography of Investing is a method of evaluating companies and assessing risks based on where each company generates its revenue, rather than where it is domiciled. In the distant past, country-of-domicile was a good indicator of where a company did the lion’s share of its business. That is increasingly no longer the case. Many of the leading multinationals in the NPF portfolio are based in one country but generate far more revenue in other parts of the world.

Nestlé is an excellent example. Nestlé is based in Switzerland, but its largest sources of revenue are the U.S. and Latin America. Moreover, its most rapidly growing markets are in Asia and Africa. By these measures, Nestlé can hardly be considered a European company. It just happens to be where the company’s top executives choose to maintain their corporate headquarters.


Looking at the NPF portfolio through the New Geography lens shows us that the fund has more exposure on a revenue basis to the U.S. and emerging markets (principally China) than it does to Europe and Japan. The difference isn’t huge, but it is meaningful as a way of more accurately gauging some of the investment opportunities and risks inherent in the fund. 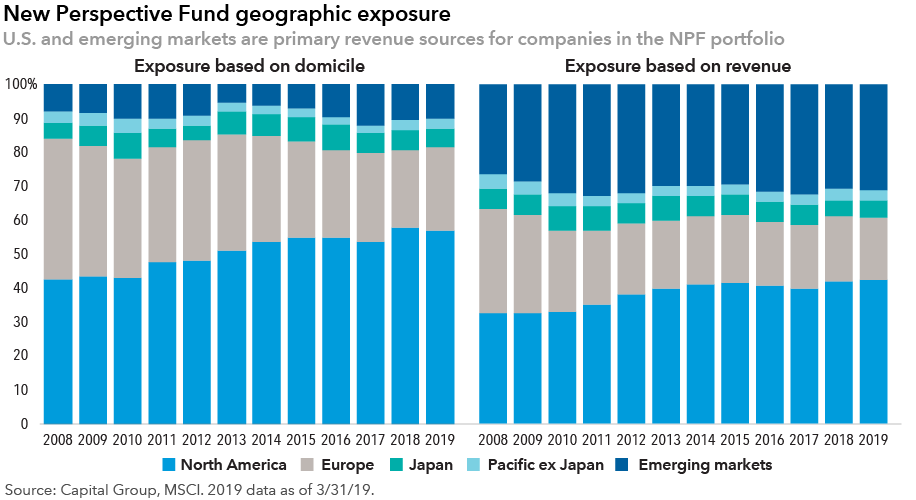 How has the New Geography concept evolved over the years?

Lovelace: If anything, I think it’s more important and relevant now than it has ever been. Many more companies are reporting detailed sources of revenue today as compared to five years ago, so we have even better data. In the early days we produced a lot of estimates, which we still do now for the companies that don’t break it down in their financial statements. The basic conclusions haven’t changed too much. The U.S. remains a very important source of revenue for many multinationals, but China is rapidly moving up that scale, challenging the dominance of the U.S. in many ways. I expect to see that trend continue.

Our initial thesis that country of domicile is not an effective way to evaluate companies is now far more pronounced. We used to say, half-jokingly, “You can’t invest in Europe even if you want to.” That is becoming truer today given that more than 50% of the revenue from European-based companies comes from outside Europe. As multinationals grow larger and expand into more markets, I think the investment discipline underpinning the New Geography concept should continue to serve our investors well.

In recent months, NPF has increased its exposure to the health care sector. Why?

Polak: The answer is very much about individual stock picking. This is where our focus on fundamental, bottom-up research pays off. Many of our analysts have decades of experience covering companies in this sector and elsewhere. They approach their jobs with a long-term perspective. For example, our health care analysts have been keeping an eye on the human genome project for years. They knew it had the potential to unlock innovative new drugs, but it took longer than the typical patience level of most investors.

Fast forward a few years and the science is starting to produce tangible results. Smart companies are figuring out ways to replicate these new treatments on a large scale. Small biotech firms are proving that it works in the lab, and Big Pharma is moving in via acquisitions — flexing their research and marketing muscle. Our analysts are well placed to identify these events since they’ve often been following the story from the beginning.