With less than two months before Election Day, midterm elections are top of mind for politicians and voters alike. And while control of Congress and influence over future policies may be at stake, do midterm elections have any effect on equity markets?


To find out, we examined over 85 years of S&P 500 data, and it turns out that stock markets do exhibit some unique characteristics during midterm election years. While a variety of other factors influence stocks in any given year, after digging deeper into midterm election history we’ve identified five key takeaways as illustrated in the charts below. 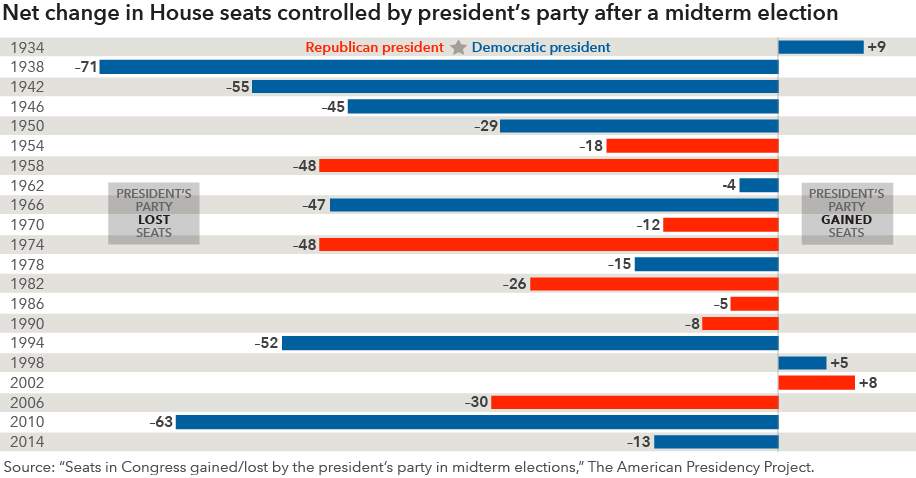 Why is this the case? First, supporters of the party not in power usually are more motivated to boost voter turnout. In addition, a president’s approval rating typically dips during the first two years in office, which can influence swing voters and frustrated constituents to seek change.


Since losing seats is so common, it’s usually priced into the markets early in the year. But the extent of a political power shift — and the resulting policy ramifications — remain uncertain until later in the year, which can explain some of the trends we see in the following charts.


2. Market returns tend to be muted until later in midterm years.

Since markets rise over long periods, it makes sense that the price chart of an “average” year also would steadily increase. However, isolating just the midterm election years highlights that these periods are different than others. In such instances, markets tend to move sideways for most of the year, gaining little ground until shortly before the election. The adage that markets don’t like uncertainty seems to apply here. Earlier in the year there is less certainty about the election’s outcome and its policy impact. But markets tend to rally when results are easier to predict in the weeks before an election, and continue to rise after the polls close and winners are declared.

If you think midterm election years would be more prone to market volatility, then you’d be right. Once again, election year uncertainty seems to translate directly into higher volatility. This is especially true in the months leading up to an election. 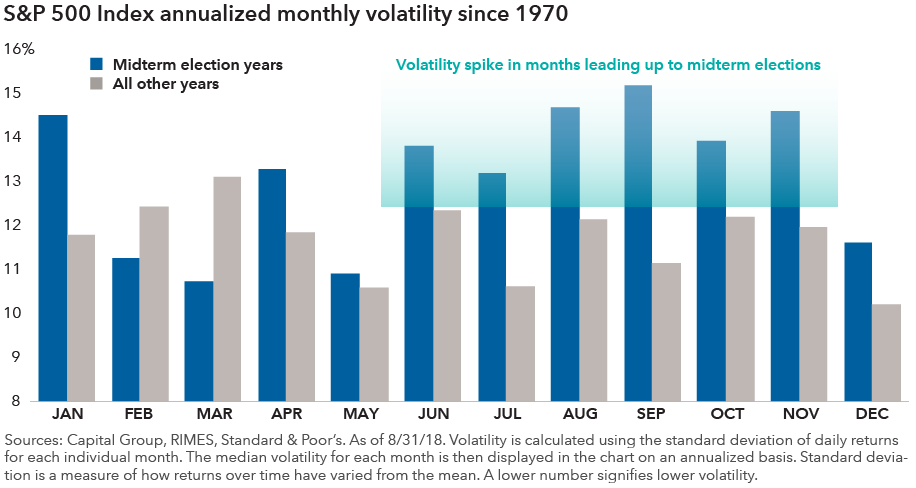 Since 1970, midterm years have a median standard deviation of returns of 15%, compared with 13% in all other years. Interestingly, the volatility in presidential election years has been very similar to non-election years, pointing to midterm elections as truly an outlier.

The silver lining for investors is that after such bouts of volatility, markets tend to rebound strongly in subsequent months. As we saw previously, markets typically rally shortly after midterm elections. History also shows that this isn’t just a short-term blip: above-average returns are typical for a full year following the election cycle. Since 1950, the average one-year return following a midterm election is 15%, more than double that of all other years during a similar period. 5. Even when the House flips control, markets have similar patterns.


The consensus among most polls this year is that not only will Republicans lose seats in the House, it likely will be enough to give Democrats the majority. If this comes to fruition, would markets react differently than in a year where the majority simply lost its edge but remained in control?

The House has lost its majority during midterm elections only three times in the past 60 years, but those three years showed similar patterns to what we’ve described above — choppy markets early in the year and rising stocks around Election Day. Although no strong conclusions can be drawn from such a small sample size, history seems to indicate that a change of control in the House is not necessarily a negative market event.


So what’s the bottom line for investors?


While midterm election years have exhibited these trends in aggregate over long periods, it is important to remember that each year is different and follows its own path. Midterm elections — and politics as a whole — generate a lot of noise and uncertainty. But the reality is that long-term equity returns are generated by the value of individual companies over time. A prudent investor should look past the short-term volatility spikes that elections can bring and maintain a long-term focus.